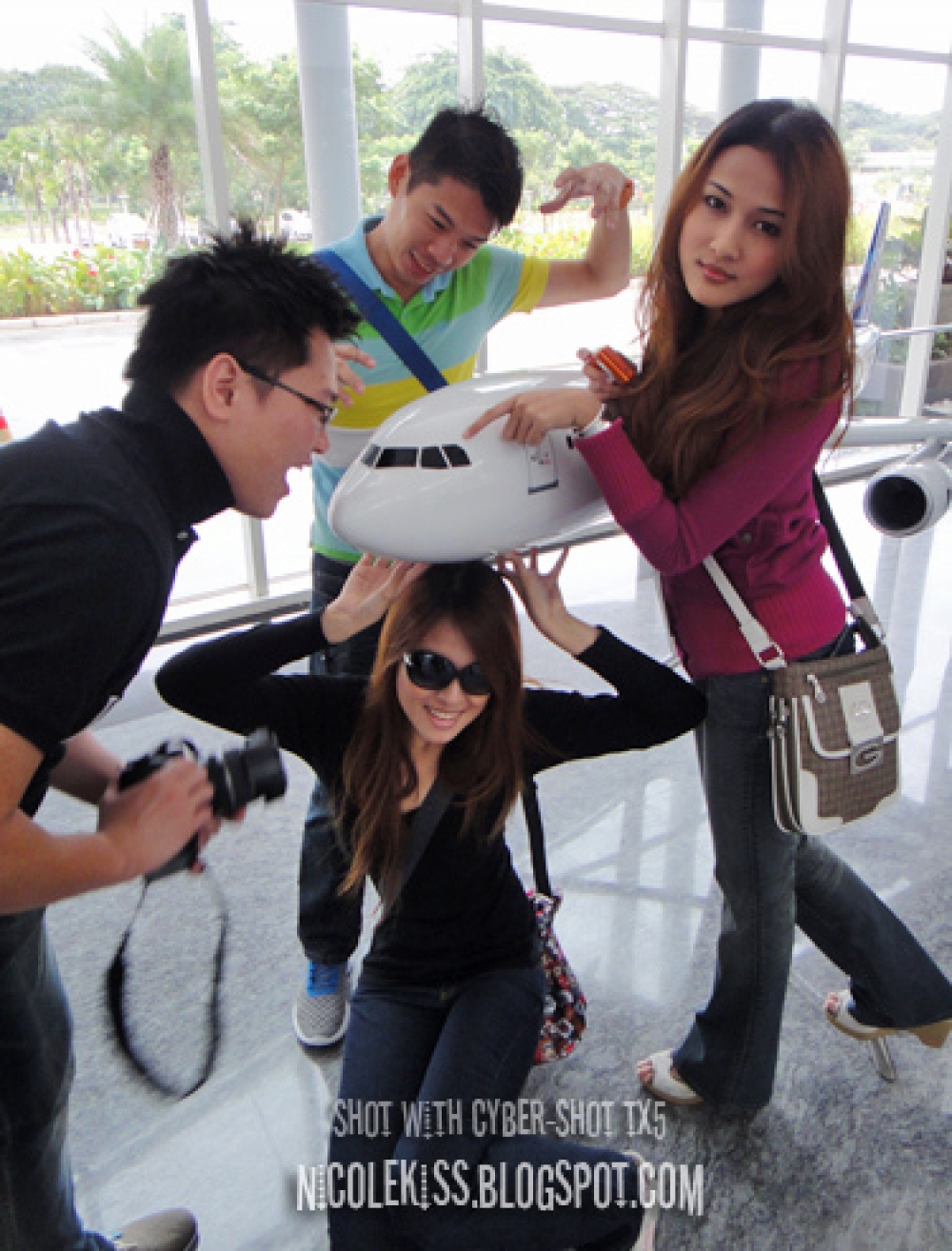 I opened my newsfeed service, and when this title popped-up... I got so scared and shocked. But, haha... guys, meet Nicole! She led a group of Malaysian bloggers who were very lucky to explore Garuda Indonesia HQ and workshop in Jakarta. Nicole, thanks for letting me quote your writing. Guys, enjoy her entertaining writing. Hijacking a Plane: Garuda Indonesia After two days of shopping streak, we decided it was a good idea to hijack a plane on the third day, being broke and all. 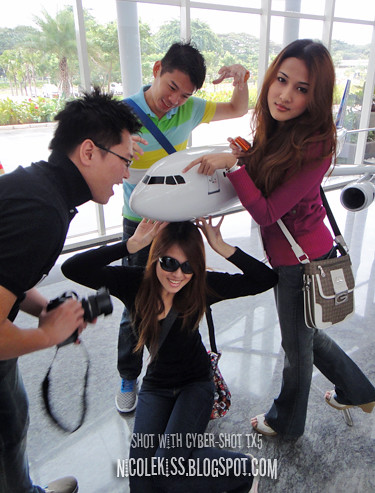 Haha. Mini plane. No really. I did hijack a plane. 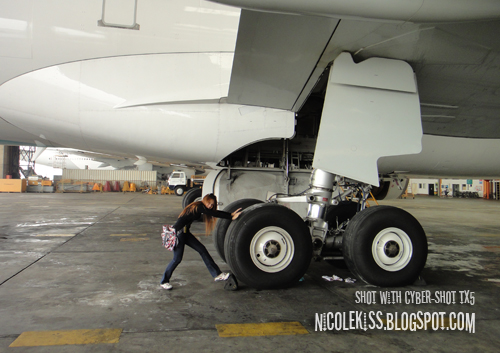 Okay la, actually we went to visit the Garuda Indonesia Headquarter. I know what you are thinking: "yawn, boring" I agree. In fact, I was thinking the same thing until they brought me up to this baby! 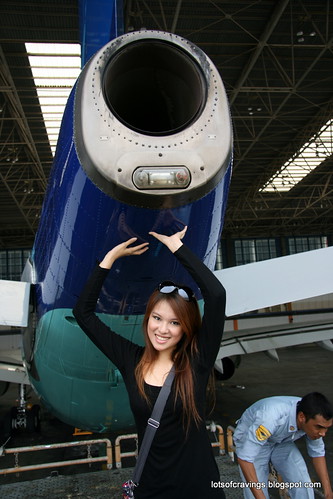 A330-200. I mean it's my first time getting up close to a big plane (not the budget propeller plane sort where you board from outside instead of a tube connecting right into the plane) from outside the airport. We were even elevated up to touch the tip of the plane tail. SO COOL!!!! (note: the vehicle being the electrical elevator) Don't know, touching the tail of a big ass plane? Just the sort of things that never cross my mind. :S We went to the repairing warehouse and found an actual plane engine, just the naked engine itself. It waasss MASSIVE!!! The price of this ugly looking machinery could literally (very possible) cost one million BMW cars. Well I don't know the exact price but it has to be near there. So I heard from the engineers. Then I saw this I just had to laugh, and snap a photo of it. 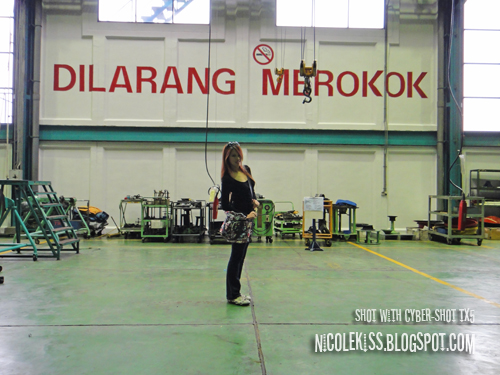 What a big "No Smoking" sign. We climbed up the plane (without really asking for permission) and I had a try-out on their business class seatings. 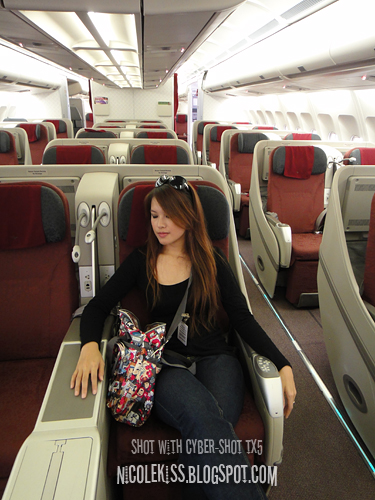 I could only dream of taking business class seating everywhere I go. Thanks to the astronomical charges a middle-income citizen like me would only dream to earn every month. 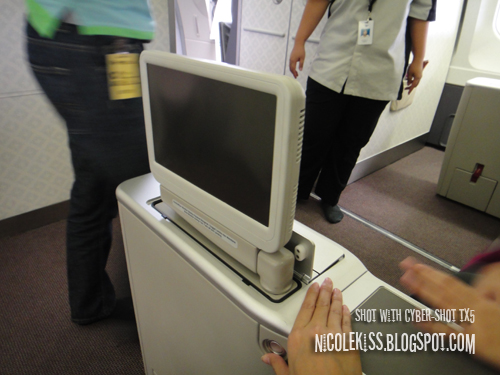 One can dream yes? These business class seating just made me SOOO reluctant to ever go back to economy class, though they didn't look half bad to begin with, but it's hard to feel optimistic once you've been indulged, even for a little while. Then I went to explore the cockpit. 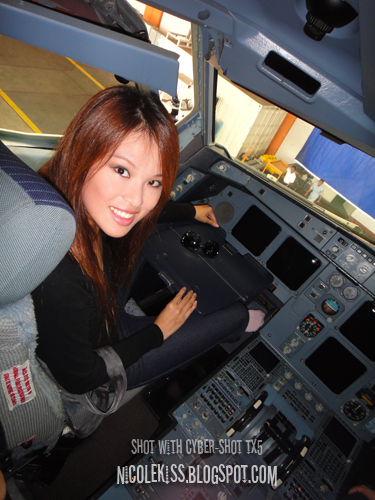 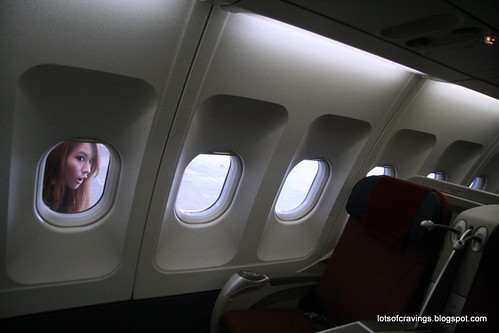 "Look I'm stuck outside the plane, help!!!" *delusional* Back on land. This was one of the first fleet of Garuda plane ever flown. 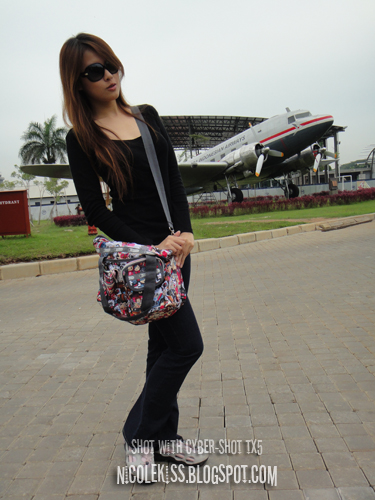 Dinner that evening was somewhat the most spectacular we had in Indonesia *cough*, thanks to Garuda. Source: Nicolekiss Travel Blog