1. Republic of Indonesia is the world's largest archipelagic country consists of 17,504 islands (including 9,634 islands and 6,000 unnamed islands are uninhabited). 2. 3 of the 6 largest islands in the world are in Indonesia, namely: Borneo (the third largest island in the world amply 539,460 km2), Sumatra (473,606 km2) and Papua (421,981 km2) 3. Indonesia is the largest maritime countries in the world with waterline covering an area of 93 thousand km2 and the length of the coast about 81 thousand km, or almost 25% of the length of all beaches in the world. 4. Java Island is the most populous island in the world where about 60% of the populations of Indonesia (about 130million people) live on the island which covers only 7% of the entire territory of Indonesia. 5. Indonesia has more ethnic groups in this country than anywhere else in the world. There are more than 740 tribes / ethnic groups, where in Papua alone there are 270 tribes. 6. Country with the most number of regional languages, namely, 583 languages and dialects of the 67 main languages used by various tribes in Indonesia. National language is Indonesian, although the local language with the largest number of users in Indonesia is the Javanese language. 7. Indonesia is the country with the largest amount of Muslim population in the world. Muslims in Indonesia are around 216 million people or 88% of the population of Indonesia. Indonesia also holds the record for the largest number of mosques and the State of origin of the world’s largest pilgrims. 8. The largest Buddhist monument (temple) in the world is temple of Borobudur in Central Java with a height 42 meters (10 levels) and relief more than 1 km long. Estimated to be over 40 years old, built by a dynasty during the ancient Mataram kingdom (750-850). 9. Place of discovery of the world’s oldest human specimen, namely: Pithecanthropus Erectus’ or the ‘Java Man’ ¬ which is estimated to come from 1.8 million years ago. This suggests that the Indonesian archipelago was inhabited two million to 500,000 years ago. 10. Republic of Indonesia was the first country that was born after the end of World War II in 1945. RI is the 70th eldest state in the world. 11. Indonesia is the first country (until now only one) that ever came out of the United Nations (UN) on the January 7, 1965. RI re-joined the United Nations in 1966. 12. Indonesian badminton team has won the badminton’s symbol of supremacy, Thomas Cup 13 times, the most number of times a country has won the cup (the first time was in 1958 and the last in 2002). 13. Indonesia is the largest producer of liquefied natural gas (LNG) in the world (20% of world supply) and is also the second largest tin producer. 14. Indonesia is ranked 1st in agricultural products, namely: Clove (cloves) and nutmeg (nutmeg), and No.2 in natural rubber (Natural Rubber) and crude palm oil (Crude Palm Oil). 15. Indonesia is the largest exporter of plywood (plywood), which is about 80% in world markets. 16. Indonesia has the richest coral reefs in the world (18% of world total). 17. Indonesia has the most shark species (150 species). 18. Largest biodiversity of orchids in the world: six thousand species of orchids, ranging from the largest (or Grammatophyllum speciosum Tiger Orchid) to the smallest (Taeniophyllum, which is not leafy), including the Black Orchid is a rare and only found in Papua. 19. Has the largest mangrove forest in the world. This plant is useful to prevent sea water erosion / abrasion. 20. Ancient animals are still alive: Komodo dragons which are found only on Komodo Island, East Nusa Tenggara is the largest lizard in the world. It can reach 3 meters in length and weighs a whopping 90 kgs! 21. Rafflesia Arnoldi which grows in Sumatra is the largest flower in the world. When the flowers bloom, its diameter reaches up to 1 meter! 22. Indonesia houses the world’s smallest primate, The pygmy tarsier (Tarsius pumilus), also known as the mountain tarsier or the lesser spectral tarsier, is a nocturnal primate found in central Sulawesi, Indonesia, in an area with lower vegetative species diversity than the lowland tropical forests. 23. The world’s longest snake, Python Reticulates with length of 10 meters was discovered in Indonesia. 24. The smallest fish in the world have been found in the muddy swamps of Sumatra. It is merely 7.9 mm long as adult, The tiny, see-through Paedocypris fish have the appearance of larvae and have a reduced head skeleton, which leaves the brain unprotected by bone. Source: TrulyIndonesia 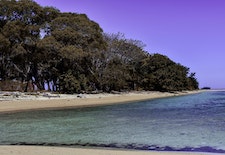