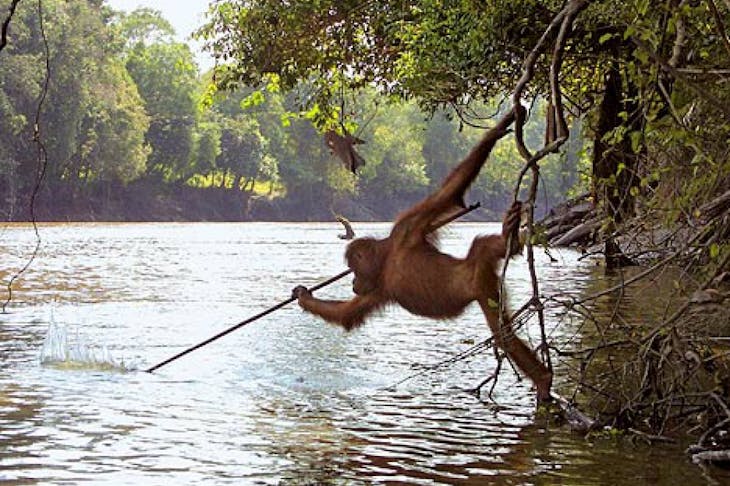 Traversing the jungle in hope of spotting an orangutan is a trip highlight for many tourists who venture to North Sumatra. The Bukit Lawang area, about 85 kilometers northwest of the provincial capital, Medan, offers visitors the chance to get close to the majestic apes while still getting a good night’s sleep, dining on familiar food and benefiting from many pairs of helping hands. Gunung Leuser National Park is the last stronghold of the critically endangered Sumatran orangutan, which has been pushed toward extinction by habitat loss and poaching. While the tourist dollar is an important conservation tool that draws attention to the issues of deforestation and wildlife conservation, and provides jobs for local communities, the dilemma is how to ensure that the negative effect of tourism on the orangutans is minimized through sustainable ecotourism standards. Panut Hadisiswoyo, the founding director of the Orangutan Information Center, a group dedicated to the conservation of Sumatran orangutans and their forest homes, believes that the 6,500 remaining orangutans in the Bukit Lawang area are at risk of extinction if tourism ventures continue to disregard conservation principles. “At the moment, tourism brings money into the local economy and encourages locals to protect forests from encroachments and illegal logging, but it may have a serious impact on the orangutan population in the long run,” Panut said. “Even though it’s forbidden to touch and feed orangutans, many misguided tour guides still encourage such behavior for the enjoyment of the visitors.” These practices are a major cause for concern because orangutans are susceptible to many human diseases, and feeding them undermines rehabilitation by discouraging semi-wild orangutans that have been released into the area from reducing their dependency on humans. “Fungi, scabies and a number of bacteria and germs, for example, can be spread through direct human contact with wildlife,” Panut said. “Parasites can also become a major threat when orangutans spend more time on the ground as a result of supplementary feeding by tourists, which can increase their exposure.” Andrea Molyneaux, from Britian, arrived in Bukit Lawang five years ago as a volunteer at an orangutan health project and has since opened a guesthouse there. “While orangutans may seem fine with people on the surface, there are long-term consequences to such contact in terms of stress, fertility issues and immunity problems,” she said. What initially drew tourists to Bukit Lawang was the now-defunct Bohorok Rehabilitation Center, established by two Swiss zoologists in 1973. More than 220 formerly captive orangutans were released into the wild during the center’s 28 years of operation. “The center was moved closer to Medan after the government passed a law in 1995 restricting the release of ex-captive orangutans into areas that already have a wild orangutan population,” Molyneaux said. “Bukit Lawang was becoming oversaturated, and because of the acceleration in deforestation, ex-captive orangutans were competing for food with wild orangutans.” Although the center is now closed, those behind it still operate a feeding platform in Bukit Lawang. The platform is open to tourists twice each day, providing an opportunity for a close jungle encounter with the semi-wild orangutans for those who do not wish to, or do not have the time, to go on a two- or three-day jungle trek. “The orangutans are fed bananas and milk from the platform,” Panut said. “It is believed that a bland, unnatural diet will encourage the orangutans to search for a more tasty, varied diet for themselves.” Both the feeding platform and the jungle treks have resulted in a steady rise in tourist numbers since flash floods in 2003 ravaged the area, killing around 200 people. “The turnaround came in 2006,” Panut said. “With 5,451 registered visitors in 2008, 9,411 in 2009 and 11,515 in 2010, we expect further growth. From January to May this year we had 5,800 registered visitors in Bukit Lawang.” While the steady rise in tourist numbers may present a problem in the future if it remains unregulated, the increasing number of visitors has also given Bukit Lawang an opportunity to reinvent itself as an eco-tourism destination. Panut said it was crucial that tourism standards and visitor protocols were in place to protect the remaining orangutan population. This includes not just educating tourists but empowering local people who live near orangutan habitats to become guardians of the forest, as well as providing appropriate training and accreditation for tour guides. “We have been attempting to tackle the negative impact caused by mismanagement and what is near-unregulated tourism in Bukit Lawang by producing wildlife-viewing guideline books and films, training forest guides and park rangers about ecotourism practices, and educating national and international visitors about conservation issues and wildlife viewing etiquette,” Panut said. So far 150 visitor guides and national park rangers have gone through the information center’s training program and it appears the scheme is bearing fruit. “We regularly survey national and international tourists. In 2010, 55 percent of respondents said their guides followed the park rules compared to 35 percent in 2009,” Panut said. Molyneaux has also noted a gradual shift in the mind-set of the local community regarding conservation issues and park protection in the last few years. “The locals are becoming more aware about conservation and there seems to be a change in the mentality toward appropriate behavior,” she said. “Many are finally catching on to the fact that if tourism is to provide a sustainable livelihood opportunity for the local community, it must be carried out responsibly and managed correctly. This is a good sign for the future.” taken from The Jakarta Globe