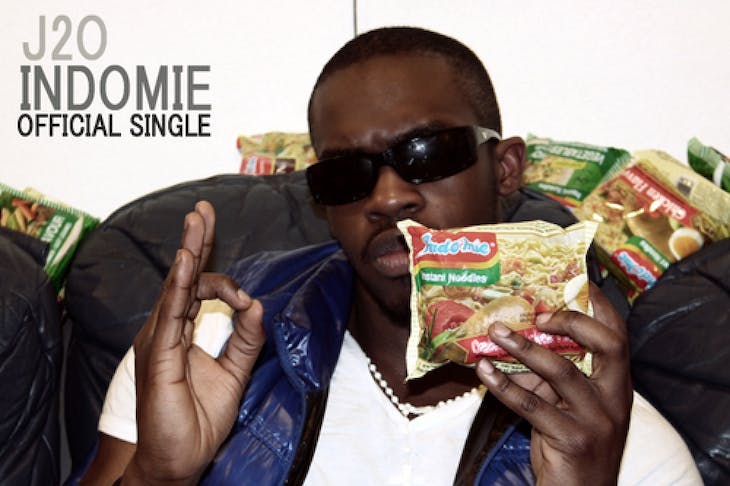 It is an old story that Indomie (an Indonesian instant noodle product made by Indofood CBP Sukses Makmur company) has been well-known all over the world. But Indomie rap song video is another story. When we type the keyword "Indomie" on YouTube search, we will find 930 videos about Indomie, but this video is something out of ordinary. It was on May 8, 2011 when a rapper from North London, United Kingdom (UK), named Jesse J2Ocean uploaded a 2 minutes and 52 seconds video on YouTube showing his Indomie addiction. When this article was being written, 312,121 people have clicked on this video on YouTube. The video setting was in a kitchen featuring him rapping with a bunch of his friends shouting "Indomie. Indomie. Indomie." In the back, there is one girl cooking Indomie and another girl is eating Indomie. His Indomie addiction is also pictured on his boot of car full of Indomie, his bag full of Indomie, his fridge full of Indomie, and his sofa full of Indomie. The lyric is pretty funny, for example is, "She's so Indomie. She don't wanna leave." He tells that he eats 2 packets of Indomie a day and gives Indomie as a birthday and valentine present for his girlfriend. The music is pretty good and clean. It shows that he did make a serious effort to produce such a nice and entertaining rap song about Indomie. There are 2622 comments for this video which mostly came from Indonesians. Most of Indonesians who commented on this video are proud of this Indomie rap song video. One example comment came from KOMANGhaha said which said, “Dude, you know what? WHOLE INDONESIA LOVES YOU! You make us proud ;) THANK YOU VERY MUCH!!!” Although it is unclear whether Indofood paid J2O to make this video or not, but J2O has become famous among Indonesians. News Source: Youtube,J2ocean's Twitter Image Source: myinternetcorner.com Written for Good News From Indonesia by Dita Liliansa