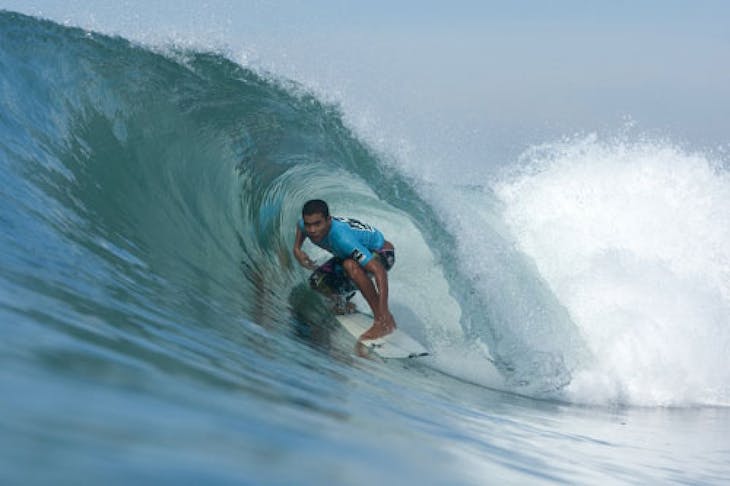 I'm happy to say that Indonesians are not only good at science and education. although our national soccer team didn't make through the world cup, we still have beautiful records in other field of sports, for example: bowling, badminton, and surfing.

Another great achievement came  from Agus Frimanto, who recently won Bali International Surfing Tournament on October 17, 2010. There were 52 competitors from Indonesia, Australia, Japan, Italy, and France, who competed in this prestigious surfing tournament. Not only the first place, the second and third place are won by Indonesians.

Agus Frimanto of Nusa Lembongan claimed victory over fellow Lembongan surfer Putra Hermawan yesterday in the final minutes of the Bali International Surfing Tournament, held yesterday at Canggu Beach on the West Coast of Bali. Third place went to Raditya Rondi of Kuta (Bali), and fourth place to Made Awan of Serangan (Bali).

It was a tightly contested battle between the two surfers from Nusa Lembongan, who have a history of ending up in the finals together. The last time the two met in the finals was at Canggu in August at the Oakley Pro Junior Coca-Cola ISC Tour sanctioned event, with Hermawan coming out on top.

"I was very happy just to make it into the final, so to win was like a big bonus for me" said Frimanto after his win. "I really thought Putra was going to win, as he was surfing very strongly throughout the day. The last time we were in a final together he won it over me, so I thought it would probably be the same this time. But I didn't want to make it easy for him so I tried my best, being aggressive and taking some chances. Lucky for me I got some of the better waves," he explained.

The wave conditions were very testing during the later part of the day, with a side shore wind creating bumpy conditions in the 2-foot surf, so the surfers had their work cut out for them to find good scoring waves.

Runner up Hermawan was disappointed but in good spirits saying, "I went into that final knowing that I could win. I felt really strong all day and when I scored that 7.9 point wave in the final I thought I had it for sure."

"Agus needed a 4 point wave score to take over first place, and with just a few minutes to go he got a 5 point wave. So he just slipped by me and then time ran out. Well, I got him last time so I guess we are even now...but watch out next time," he warned with a grin.

52 surfers from Indonesia, Australia, Japan, Italy, and France competed in the one-day Bali International Surfing Tournament that was part of the annual Nusa Dua Fiesta and Bali International Sport Week that runs from October 16-24. Due to the absence of viable venues in the Nusa Dua area for a surfing competition, and the fact that the original Kuta Beach location was not available due to preparations for a major Balinese Hindu religious ceremony, the event took place at Canggu Beach. Canggu Beach is located on the West Coast of Bali about 25 minutes from the greater Kuta-Seminyak area.

The Bali International Surfing Tournament was professionally run by the Coca-Cola Indonesian Surfing Championship organization that has been running national and international surfing competitions in Indonesia since 2004, including the 2008 Asian Beach Games.

Coca-Cola ISC CEO Tipi Jabrik was very happy to help out with the event, saying "It was a bit of a last minute thing, but the timing was right and it fit in between our scheduled events, so we put everything together quickly and it turned out great. This is our area of expertise after all, as in addition to our own tour events we also help to produce the major international surfing events that are held here in Bali and in other parts of Indonesia. Plus it gave our surfers a chance to mix it up with some international surfers and win some money!"

Though the event was not part of the Coca-Cola ISC competition circuit and so the Indonesian surfers did not receive any points, it was a great opportunity to continue to hone their competitive skills and get ready for the next Coca-Cola ISC Tour event, the Quiksilver Open, which will be held at Keramas Beach in Gianyar from November 1-6.