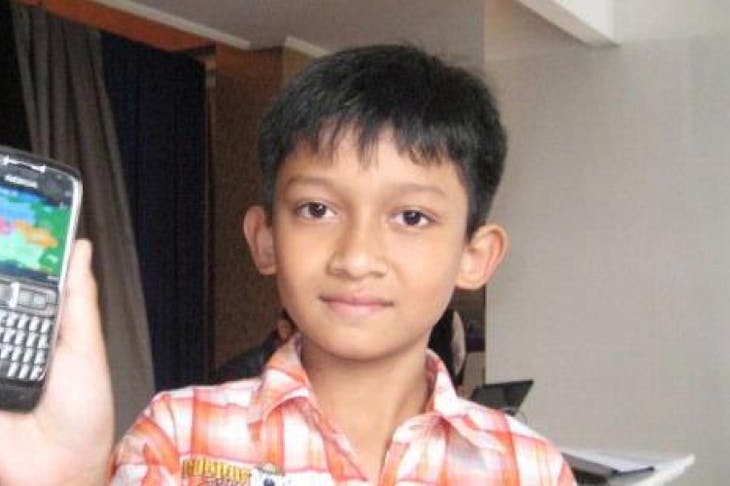 Fahma Waluya is just 12 years old, but he's not an ordinary kid. What makes him different from others is that he is an application developer. He likes creating games and mobile application that is useful for children. How does he do it? He usually starts by making a simple animation, then he converts (or whatever it says) the animation into a software for mobile phone, using a program.

Amazingly, his hobby leads him into a beautiful achievement. This young boy recently won an award at the 10th International Asia Pacific ICT Awards which was held on October 15 2010. Fahma, a student of Salman Al Farisi full day school, Bandung, received an award for category Best of Secondary Student Project. his project's name is My mom’s mobile phone as my sister’s tutor. He was helped by his sister, Hania (6 years old). This achievement makes both of them the only Indonesian who got an honorary award in the competition. there are 16 categories, 180 nominees, and 17 countries competed in APICTA this year, including Australia, Brunei, China, Hong Kong, India, Taiwan, Korea, Macau, Malaysia, Myanmar, Pakistan, Philippines, Singapore, Sri Lanka, Taiwan, Thailand and Vietnam. Because of Fahma and Hania, Indonesia successfully listed its name in the winner's list of APICTA 2010. Although we only won one award among 16 categories available, but we have to be proud, because Fahma and Hania are the youngest winners of all. What else could be better than that? Check this article about Fahma, For some, creating apps or games can seem like a daunting challenge. However, Fahma Waluya Rosmansyah spends his free time creating games that help Indonesian children learn the English language or even basic maths skills. That in itself is worthy of a round of applause, but we forgot to mention that Fahma is only 12 years old. Now that’s amazing.Fahma was born in Indonesia in 1998 and like most kids, loves playing with his games console, PC games and with mobile phones, and it was when Fahma reached fifth grade that he began to learn how to develop with Adobe Flash. That same year he created his first application called BAHANA which allows young children to learn the alphabet, numbers and colours – all from a Nokia E71. In his sixth grade, he developed over 5 more applications, one of which is downloadable from the Ovi Store. ENRICH enables children to translate Indonesian words into English using colourful images and clearly pronounced words. MANTAP is a similar app but instead teaches Indonesian children Maths, and should be available from the Ovi Store in the coming weeks.Fahma tells us he can create an application from scratch in less than 12 hours, with the help of his younger sister, Hania, who provides some of the sound content. She is also his main source of inspiration and beta tester. Having recently been awarded the Indonesia ICT Award 2010, Fahma plans to continue developing apps for local Indonesian children and even hopes that one day his apps can be made available to every child, globally.Here are some screen shots of the ENRICH app.

For a 12 year old, currently going through school, we find this an incredible story and shows what the young mind can achieve, and what’s even more commendable is that these apps are used to help young children learn some valuable life skills. Download ENRICH News Source: Nokia, Grey Review Photo Source: Nokia, KOMPAS