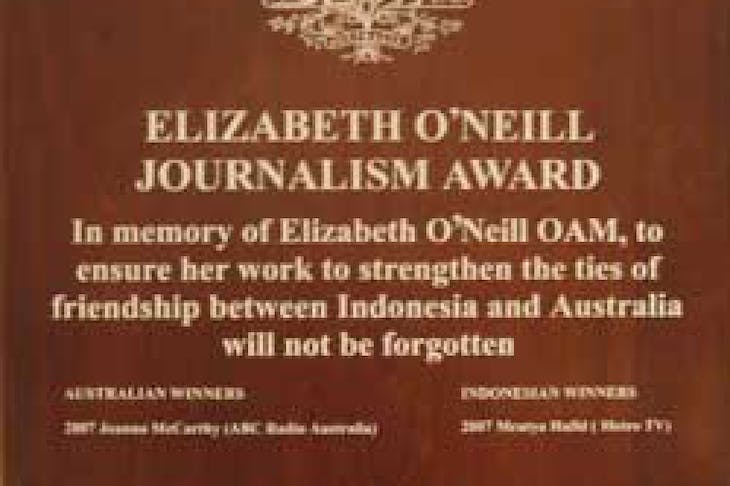 Arif Zulkifli, executive editor of Tempo Weekly Magazine, has won the 2010 Elizabeth O’Neill Journalism Award. The same prize was presented to a political correspondent of The Sunday Age Daily from Australia, Josh Gordon.

Australian Prime Minister Kevin Rudd said the award was presented to honor Liz O’Neill, the Press Attaché at the Australian Embassy in Jakarta, who died tragically on a plane crash in Yogyakarta on March 2007 while on official assignment. “Liz O’Neill worked hard with the Australian and Indonesia media to build a better understanding between both countries through accurate reports,” said Rudd, at a press conference at the Australia Prime Minister Office for Foreign Affairs, the text of which Tempo received on Saturday. The award is presented every year to two reporters, each from Australia and Indonesia. The award is open to journalists from the print media, radio, television, and Internet. The award is sponsored by the Australian Foreign and Trade Department as well as the Australia-Indonesia Institution. The award winners will stay at the partner country for three weeks to meet with government officials, academics, representatives from the industry and non-governmental organizations, and public leaders. The exchange visit is aimed at developing understanding and appreciation on current issues faced by Indonesia and Australia. Arif Zulkifli has been with Tempo for 12 years, focusing on investigative journalism. He is interested to explore government administration, transparency, investigation journalism, as well as to develop understanding about press control and journalism ethics from Australia’s point of view. Source: Tempo Interaktif