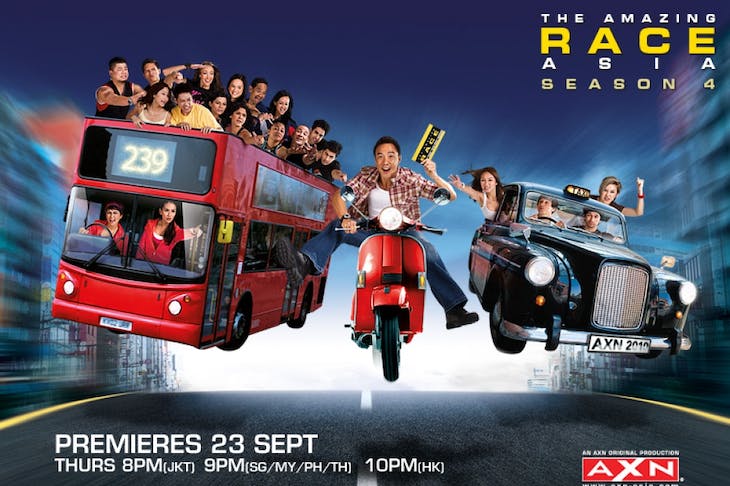 1. Watch the season finale of the Amazing Race Asia on 9 Dec 2010 on AXN!The Amazing Race Asia is a reality game show based on the American series, The Amazing Race. On 17 October 2005, CBS gave other countries the chance to franchise The Amazing Race. The Asian cable TV network AXN Asia was among the first to acquire the rights to produce a version for its territories. The show is produced by Australian television production company ActiveTV, for AXN, in association with Buena Vista International Television-Asia Pacific (BVITV-AP). The host for the show is Singapore based Chinese-American actor Allan Wu.[1] The ultimate prize is US$100,000, whilst the American show gives away US$1 million. The general manager of SPE Networks-Asia which runs AXN, Ricky Ow explained the smaller prize, saying, "It is not really about the money but the adventure and opportunity to be in one of the world's greatest reality shows". Now, the Amazing Race Asia has season 4. Through long time, this month the amazing race asia's going to season finale. And the good news, the contestants from Indonesia had been through to top 3. They are Hussein and Natasha. Here's their profile: Natasha Sutadisastra, 24, Legal Admin | Hussein Baron S., 53, Educator Father and Daughter, Indonesia Even before the race has begun, Natasha and Hussein have already broken a new TARA record, by being the first father-daughter team in the show’s history! Natasha is without doubt, the quintessential daddy’s girl. The affection between the two is palpable, for Hussein practically beams with pride when he talks about his daughter, who was recently crowned Miss South Jakarta 2007. Having resided in the US, China and Canada for a number of years and toured much of Asia, Africa and Europe, Hussein is as seasoned a traveller as they come. Despite her youth, Natasha is catching up fast with her dad in clocking global adventures. As avid fans of the show, the globe-trotters have been hard at work, poring over every detail of all three seasons of TARA, as well as the US version, while building up their fitness at the same time. They have always treasured spending quality time with each other; in fact, Natasha introduced him to Facebook and even clubs with Dad! For Hussein, the race is one of the very last opportunities for them to hang out together, before Natasha gets married. Don't miss it..watch it the season finale of the amazing race asia on AXN channel on thursday 9 dec 2010 at 8 PM. 2. Watch today "Megacities: Jakarta" on National Geographic Channel!

Don't miss it this episode! Watch today, on National Geographic Channel at 8 PM. The NG will show and reveal Jakarta on their TV program Megacities. This evening, that program will tell you everything about Jakarta. Watch Megacities: Jakarta tonight at 8 PM local time WIB (Western Indonesia Time) and will be rerun at on another day.