A Great Pianist from Indonesia 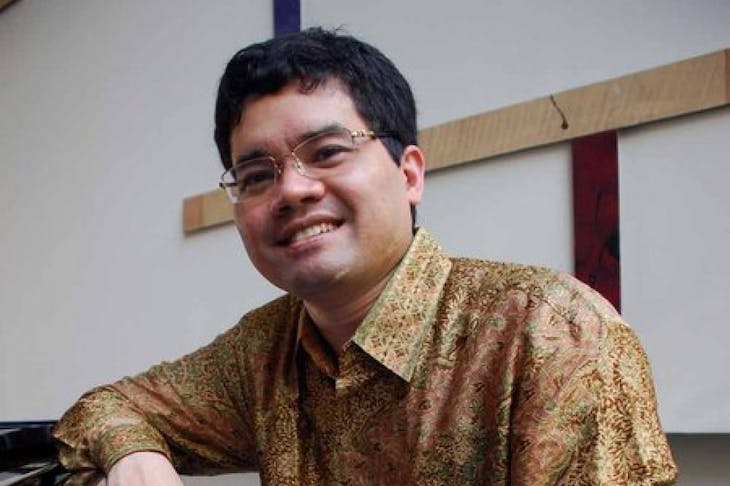 A Great Pianist from Indonesia

have you ever heard about Ananda Sukarlan? Ananda Sukarlan (born June 10, 1968, Jakarta) is an Indonesian pianist who has been internationally known because of his works in classical music. He started his music lessons at the age of 5 from his older sister. After graduating from Kolese Kanisius (Canisius College, Jakarta) in 1986, Ananda Sukarlan continued to study in University of Hartford in Connecticut, under a scholarship from Petrof Piano. He then went to Europe when he was 17, graduated with summa cum laude in 1993 from the Royal Conservatory of Den Haag under the guidance of Naum Grubert and was a prize winner of many international competitions, such as the Nadia Boulanger Award of Orleans. The Indonesian pianist has performed in many overseas festivals with symphony orchestras and ensembles of Berlin, Rotterdam, nearly all symphony orchestras in Spain, Paris, Wellington as well as appearances in radios and TVs throughout Europe. He was the first Indonesian artist who established the cultural relationship between Portugal and Indonesia by performing as a soloist with the Portuguese National Symphony Orchestra in 2000, right after the re-opening of the diplomatic relationship between the two countries. He is the only Indonesian listed in the book "2000 outstanding musicians of the 20th century" and "The International Who's Who in Music" published by Cambridge. Until the beginning of 2010 he has recorded 14 CDs, which include the complete piano works of Santiago Lanchares, David del Puerto, Jesus Rueda, Toru Takemitsu as well as works by Peter Sculthorpe, Amir Pasaribu, Trisutji Kamal, Theo Loevendie and of course himself. As an equally successful composer, his works have been commissioned and performed by the Associated Board of Royal Schools of Music, Indonesian Opera Society, among others. His collaboration with prominent choreographer Chendra Panatan has given birth to many works for ballet, performed both in Europe and Indonesia. His groundbreaking opera written for one soprano only, based on a monologue by Seno Gumira Ajidarma, "IBU -- yang anaknya diculik itu" (Mother, whose son had been kidnapped) was just premiered in June 2009 in Jakarta. Until now he has written works for orchestra and instruments, but it is his production for voices, such as his more than 80 songs for voice and piano, choral works, 2 operas, 2 cantatas ("Ars Amatoria" and "LIBERTAS") and theatre works that consolidated his high reputation as a composer by being frequently performed all around the world. Other celebrated chamber / solo works include the string quartet "Lontano" for Midori Goto and her quartet, a guitar solo piece for Miguel Trapaga, many works for piano solo (a series of Rapsodia Nusantara based on Indonesia folk melodies, a series of virtuosic Etudes, and 37 easy piano pieces compiled as "Alicia's piano book") and multiple pianos. Projects in 2010 include his third opera, "PRO PATRIA" (Losing and Winning) based on a novel "Kalah dan Menang" by celebrated Indonesian author Sutan Takdir Alisjahbana commissioned by Bimasena, and a modern ballet based on the legend "Joko Tarub", a collaboration with Chendra Panatan. He is also working on a series of musical works written for disabled musicians, on a commission by Fundacion Musica Abierta of Spain. Ananda Sukarlan is a founding member of Musica Presente and of Jakarta Conservatory of Music. his compositions list is very long, so i can't mention it in here. but i can give you the list of international honors and awards he has achieved. check these out: His works have been the object of studies for many doctoral thesis and other musical researches by many students, professionals, musicians and musicologists in the U.S, Europe and Australia. so, what do you think? isn't it amazing to know that there's an Indonesian with such a talent? News Source : Wikipedia Photo Source : kompasiana