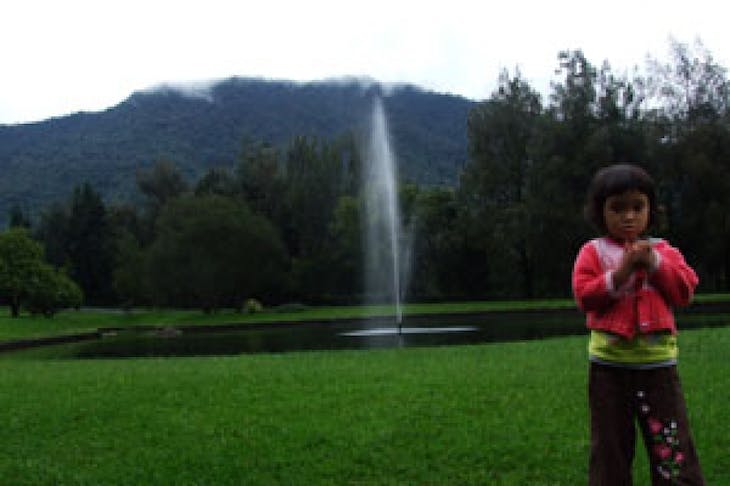 We all know that some richest biodiversity (especially plants) on earth are available in Indonesia. But, we have to admit that other countries also have their own attraction of nature. Yet, we still don't have to travel around the globe to see the uniqueness of plants because Cibodas Botanical Garden has all you need to see. Situated 1300-1425 m high on the slopes of Mount Gede-Pangrango, Cibodas Botanical Garden contains beautiful mountain scenery with impressive views across the Cipanas valley of West Java. The Garden covers about 125 ha of undulating topography, with large grassy expanses, rocky coniferous areas, and valleys filled with tree ferns and waterfalls. Cibodas Botanical Garden is a popular recreational center for the Greater Jakarta area as well as a research station for students and scientists studying tropical mountain flora.

The Garden maintains a herbarium and seed museum for research, development and conservation purposes. The 4521 herbarium specimens from 1503 species consist of those collected from the Garden and from the Gede-Pangrango National Park which is annexed to the Garden. The 649 species in the seed museum are used as a reference for seed identification. Historically the Cibodas Botanical Garden is associated with the introduction of quinine to Indonesia. Here that valuable species was planted for the first time, introduced from South America. A few years later, the plants had to be transferred to another, more suitable place, but the introduction of exotic plants to Indonesia continued. Worth mentioning are the introduction of Eucalyptus species from Australia, and the conifers from Europe and America, which now dominate the landscape. The succulents Aloe and Agave, and the Acacia, Callistemon and Camellia plants were introduced for decorative purposes, in addition to many other temperate species which can be seen in the commercial nurseries alongside the roads leading into the Garden. Fern collection

Ferns are some of the most ancient plants on the earth, and in both form and habitat exhibit great diversity. In the Garden you will see aquatic ferns such as Azolla spp. floating in the water, terrestrial ferns including Polypodium feei growing at the base of trees, edible ferns such as Diplazium esculentum aerial ferns including Blechnum vulcanicum, found nestled among the branches of trees, and tall tree ferns such as Cyathea spinulosa or Dicksonia blumei. Some species of the genus Cyathea have been recorded to reach heights of more than 24 meters and to have leaves of 5 meters or more in length. The fern, or Pteridophyte, collection is primarily concentrated in the area between the cafeteria and the guesthouse. The external collections contain the impressive tree ferns with their bristly young fronds (leaves) coiled in the bud. These plants are found throughout the rainforest at high altitudes, as they thrive in the cool and damp climate. Inside the special fern house you can see many species growing along the stone pathways and bridges. Glasshouse collections These collections are maintained in newly renovated glass houses above the guest house. They consist of cacti, succulent plants and orchids. There are nearly 4000 living specimens of 350 species of cacti and succulents, and 360 species of orchids. The cacti and succulent collection contains species from all over the world, including Agave, Dracaena, Sansevieria, Yucca, and Aloe species: many with brilliant yellow, red, pink or purple blossoms.

The Garden's orchid collection contains both epiphytic (on trees) and terrestrial (on the ground) orchids, including the most impressive Paphiopedilum javanicum, a terrestrial orchid indigenous to the Cianjur area. The orchid collection also houses representatives from around the Indonesian archipelago, including Dendrobium spp. from Irian Jaya, Paphiopedilum spp. from Sumatra, and the famous national flower, Phalaenopsis amabillis or Moon Orchid from Maluku. Palms collection 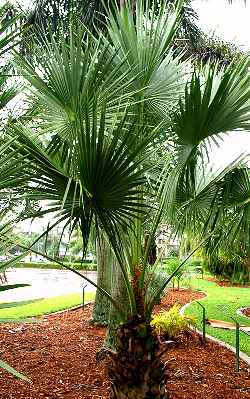 The palm collection in Cibodas Botanic Garden contains collections from all over the Indonesian archipelago: Pinanga lauhlii from Java, Pinanga densiflora from Aceh, Sumatera, Areca vestiaria from Sulawesi, Areca spp. from Maluku, Arenga undulatifolia from Kalimantan and Ptychococcus spp. from Irian Jaya. The Garden also contains representatives from Latin America (Chamaecyparis spp.), China, Australia (Livistona spp.), The Phillipines and The United States. The visitor can take special note of the Central American "peach palm"(Bactris gasipaes) found in Sections X.A. and XIII.B., which is an important source for people in Latin America. The fruits are boiled in saltwater, and the floury, orange flesh is a carbohydrate source. The uniquely formed Phoenix canariensis var. loureririi from the Canary Islands can be found in Section II.B. In Indonesia palms are used for food (sago, coconut, sugar), clothing, household goods, medicine, magic, stimulants and ornaments. Bamboo collection

Collections of Gigantochloa spp., the enormous Javanese bamboo, can be found in Section VII.A. The more delicately-stemmed Bambusa glaucesens from Japan is located nearby in Section VI.A. Bamboo species from China, Burma, and India are also found in the Garden. In Indonesia domesticated bamboo is used for a wide variety of handicrafts, musical instruments, tools, utensils, containers, furniture and building materials, and the shoots are eaten as a vegetable. Evergreen garden trees 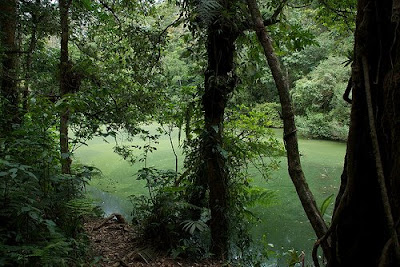 An extensive collection of Eucalyptus trees (63 species) from Australia, are planted throughout the Garden, with concentrations occurring in Sections XIII.A., B. and XVI.A. Araucaria Avenue, or the stone pathway of the tall, thick-trunked Araucaria bidwilli from Queensland, Australia was planted in ca. 1866 and can be found in Section III.B. Different varieties of oak (Quercus spp.) from Japan and the Himalyas can be found planted throughout the Garden, and the Garden's pine (Pinus spp.) collection of twenty species includes representatives from all over the globe: the Caribbean, North America, the Mediterranean, and Northern Asia. Flowering trees and shrubs Approximately 15 varieties of Camellia japonica (cherry blossom or sakura) from Japan can be found in Section I.F. The hardiest and best-known camellias are from this species, producing flowers of various shades of pink, red, and white amongst glossy evergreen leaves. 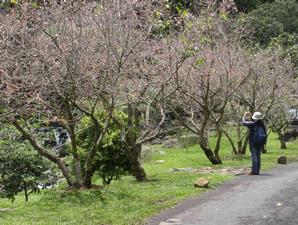 Various species of Magnolia grow well in Cibodas, including the beautiful Magnolia japonica. Rhododendrons and azaleas are among the most spectacular and important flowering shrubs of any garden, and Cibodas Botanic Garden is no exception. The rhododendrons are primarily concentrated in Section I.G., where the visitor can appreciate collections of Rhododendron mucronatum from Japan or R. javanicum, indigenous to the Cibodas area. Waterfalls There are a variety of waterfalls in Cibodas Botanic Garden, some human-made, and some naturally occurring in the landscape. Visitors can trek through the forest to a lovely natural waterfall or drive their cars over a specially constructed shallow waterfall.