SIBANG KAJA, BALI — Half a world away from Cancún, Mexico, and the international climate change talks that took place there last month, a school here in Indonesia is staging its own attempt to save the planet. It is small-scale and literally grassroots — and possibly in some respects more effective than the tortuous efforts of politicians to agree on how to stop global warming. In the midst of the lush, steaming jungle of Bali, along a pitted road, past scattered chickens and singing cicadas, Green School has two dozen buildings made of giant bamboo poles. There are no walls, and there is no air-conditioning. Just gracefully arched roofs, concrete floors and bamboo furniture. There is a big, grassy playground, complete with goalposts made — yes — of bamboo; a bamboo bridge across a rock-strewn river; vegetable patches; and a mud-wrestling pit.

But there is also a computer lab, a well-stocked library and an array of courses drawn from an internationally recognized curriculum and taught in English. More than 200 children from 40 countries, including Indonesia, are learning math here, as well as grammar, science, business studies, drama and Bahasa Indonesia, the official language spoken in this country of 240 million. The students, whose levels range from kindergarten to 10th grade and who represent 40 nationalities, are also learning to grow and thresh rice and how to make ceramics and paper from materials found on the school site. They get dirt under their fingernails and mud between their toes. Visitors are advised to wear comfortable shoes. High heels are not recommended. If all this sounds a little bit hippie and idealistic, that is because it is. A little. But then, Green School, the brainchild of John Hardy and his wife, Cynthia, is also realistic and practical, designed to give children not just a sense of how to live sustainably, but also to leave them ultimately with the skills to enter academic institutions anywhere in the world. “We want to create future green leaders — we need green leaders,” said a sarong-clad Mr. Hardy, picking his way along a dirt path last month. “We want to teach kids that the world is not indestructible.”

Mr. Hardy himself — sarong notwithstanding — is no mere dropout, tree-hugging beach bum. True, he says, he “ran away” from his home in Canada in 1975, to go to Bali. But he is also an entrepreneur, and the upmarket jewelry business he and his wife built over the years was worth enough, by the time they sold it in 2007, to allow the Hardys to set up the Green School. The original idea had been to retire quietly. But then Mr. Hardy saw “An Inconvenient Truth,” the 2006 documentary about the campaign by Al Gore, the former U.S. vice president, to educate people about climate change. “Al Gore ruined my life,” Mr. Hardy, who is now 61, likes to say.

The movie prompted him to scrap plans for a quiet life and to try to do his part to change the way young people — and ultimately society as a whole — behave toward their environment. Environment-studies courses and nature excursions have, of course, long been popular in U.S. and European schools. But Green School, Mr. Hardy and its teachers believe, is unique in that it completely immerses children in a world of sustainable practices throughout the school day — with the nonflush compost toilets, the (easily bearable) lack of air-conditioning and the fact that virtually everything in the school is created from bamboo, rather than steel, glass and concrete.

“There are lots of schools that have elements of ‘green’ teaching, but I don’t think that anyone has been ambitious or foolhardy enough to try anything on this scale before,” said Ben Macrory, a New Yorker who moved to Bali in 2008 to take on the job of Green School’s head of admissions and whose 4-year-old daughter, Maggie, attends the school. “Every experience the children have here is about how to live with only a minimal impact on the environment.” Yes, there are trade-offs. Schooling is only available from nursery school through 10th grade, with plans to extend teaching for the remaining two years by 2012. Also, students have a more limited choice of languages or other standard courses than might be available at Western schools or other international schools on the island of Bali. 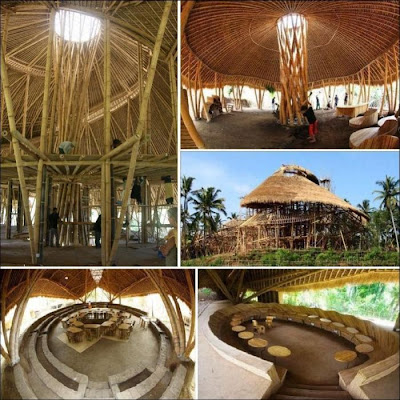 But that has not prevented the appeal of Green School, which is in its third year, from growing. Many of the students have come from other schools in Bali, and an increasing number come from families who have moved to Bali recently — often in large part because they want to send their children here. “The atmosphere is magical,” said Barbara Friedrichsen-Mehta, who visited the school with her husband, Rajesh, and their daughters Lena and Vinya last month. The family is considering moving to Bali, once their institute for innovative music has been established in Singapore. “We’ve always missed the educational vision in most of the international schools in the many places we’ve lived, and done a lot of home schooling for that reason,” Ms. Friedrichsen-Mehta said. “But this place is creative, innovative and multicultural. And the girls really, really liked it.”

The mystique of Bali — its arts, ubiquitous temples and gentle climate — helps to draw families to this place. And the slightly offbeat profile of expatriates on the island means parents are open to novel concepts like a school without walls that grows its own vegetables. “No boring people move to Bali,” Mr. Macrory said. The island attracts entrepreneurs, artists, healers and some staff members from nongovernmental organizations, rather than the financial and corporate communities that have grown in Hong Kong and Singapore, Frankfurt and New York. Still, Mr. Hardy says he is convinced that the Green School concept can work elsewhere, too, and he hopes the school will be the blueprint — or “greenprint” — for more. “Not just one,” he said — “50!” Will Green School be a game-changer in the global fight to combat climate change? Who knows? But for now, 200 children are visibly enjoying the school. And perhaps the school and its future spinoffs will someday yield another Al Gore to shake up someone’s retirement plans. A version of this article appeared in print on January 3, 2011, in The International Herald Tribune. News Source : The New York Times Photo Source : alonilearn, gamil, the source asia, outdoor japan, cool picture galery, green prophet, the jakarta post, tribenetwork Thanks to Mr. Ahmad Saiful Muhajir for the news tips!