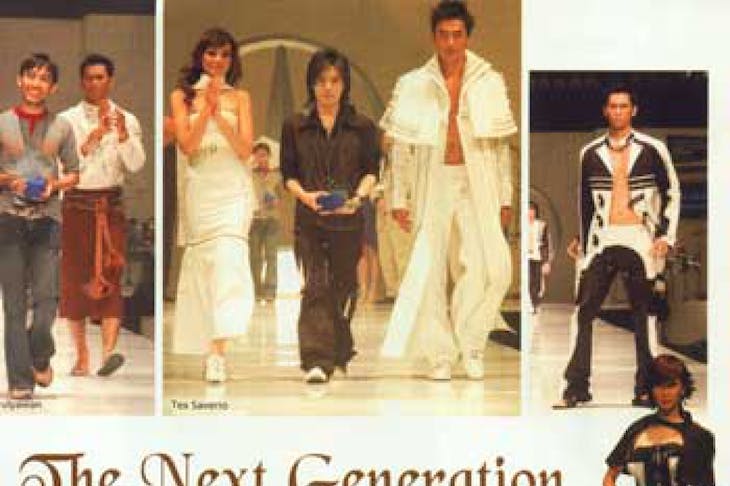 Upon entering Tex Saverio’s workshop, one is struck first and foremost by its grandeur. The high ceilings accommodate large mirrored walls and the numerous mannequins show off an assortment of imposingly elaborate gowns. One, in ashen grey and charcoal black, resembles hell fire licking the body from its long train to its enclosed throat, conjuring up images of Dante’s Inferno. Each of the gowns is as unique as the designer who created it.

“I want to design for a woman with a strong sense of character, one who knows what she wants and would not be overwhelmed by the dress,” said Saverio, who usually goes by his nickname, Rio.

With his petite frame rigged out in rocker black, shaggy crop of hair and pale, vampire-like skin, Rio defies expectations. He may resemble a rock star, complete with a vivid phoenix tattoo on his arm, but he designs clothes solely for the female form, inspired by his love of fantasy.

Rio first burst onto the scene at a joint fashion show called Rejuvenate in July 2010, sending shock waves through the Jakarta fashion world and the international fashion blogging community. Although he had already worked as a costumier for four years, Rio hadn’t felt ready to show his designs to the public until Rejuvenate.

“I was invited to the show,” said Rio, who is as soft-spoken as his clothes are flamboyant. “If they hadn’t asked me, I would have just stuck to working with my clients. But it was an opportunity.”

Based on the collection he showcased at Rejuvenate, Rio was invited to create a collection for 2010 Dewi Fashion Knights, the most prestigious event of Jakarta Fashion Week.

“I was given two months to create a collection and had to work overtime every night to finish it,” Rio said. “Here I am, a new name, and I’m joining the ranks of the Dewi Fashion Knights. People do not know who I am or what to expect! I’m showing my work off to these senior designers and I had to create a collection from scratch.”

Creating a collection for such an events is no easy task, even for someone as imaginative as Rio. He said a dress usually takes an average of two to three months to conceive. “It is the process of finding the details, researching what materials to use, and how to make the dress fall just right. That takes a while,” he said. 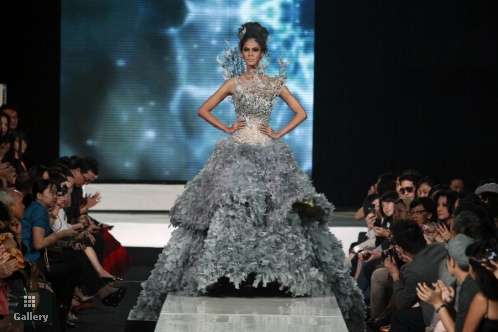 In his workshop, Rio is aided by a staff of 20, ranging from tailors and pattern-makers to those focused on finishing details.

Rio’s best seller is a ruby-red off-the-shoulder dress with an asymmetrical cut, fashioned out of shantung silk mixed with organdy and tulle.

Rio’s clothes are born of his fantasies. He said that, when he designs, he always pictures the woman who will end up wearing the dress. For the Rejuvenate fashion show, he imagined a sensual and sultry woman.

For the Dewi Fashion Knights show, Rio went the complete opposite with his pale Ice Queen-themed collection. “I wanted to see if I could do something different and still keep my unique character,” Rio said.

The singularity of a Tex Saverio gown comes from its design and the materials used in its creation. Rio likes to experiment. So far, he has adorned his gowns with feathers and faux leather with ornate details crafted by graphic designers. His style embraces a melange of technological and theatrical techniques.

“In the future, I want to use metal, earrings or crystals on my dresses,” Rio said. “Fashion should not be bound to fabric.”

That kind of outside-the-box thinking may stem from Rio’s informal background in fashion. He learnt from experience. Once, during a short course, a teacher told him that lacking a formal fashion education is a kind of blessing.

“She said it’s good to have references, but its also important to create something unique on your own,” Rio said.

His style has developed over the years. When he began working as a professional fashion designer in 2006, Rio described his clothes as much simpler.

“People wouldn’t have noticed me before because I thought that was what people wanted, so I was more influenced by the market,” he said.

Rio now describes his style as “more dramatic,” and he intends to stay true to it.

“There are a lot of young designers who are more into the business side whereas the senior generation is more into the art,” he said. “I’ll stick with the art side.”

On average, a piece by Rio goes for Rp 15 million ($1,700). Rio reasons that he is still a new name in the market and wants to let people become more accustomed to his style before releasing clothes for the general public.

But as his style evolves, so do his clients. Whereas he previously dealt in made-to-order gowns for middle-aged Chinese women from North Jakarta, the area where he lives, he now caters mostly to upper-class women.

“It’s easier because they understand fashion and what’s good. My previous clients only knew about glamor and sequins. Bling, bling, bling all the way. I couldn’t steer them to my own style,” Rio said. “After the fashion shows, however, they know what my style is like and what to expect from me.”

Indeed, the upper echelons of society are flocking to swathe themselves in Rio’s evening and bridal wear. Though clients are still finding Rio via word-of-mouth, his customer base has tripled since the shows.

“We have been doing overtime, even after the festive season. We have a lot of returning clients and brides. Previously, brides had to book six months in advance. Now, it’s one year,” he said.

It is to be expected from a designer who was featured in Cocoperez.com, the fashion blog of celebrity blogger Perez Hilton.

Referring to a statuesque gown of silver flames and feathers featured during the Jakarta Fashion Week show, Hilton wrote: “We can’t help but think of [Alexander] McQueen when looking at this dress.”

Rio was mostly pleased by the comparison. “To be likened to McQueen, who is an iconic designer, is nice. But my idol isn’t actually McQueen. It’s Valentino — more toward the classy side. Classy with a bit of crazy.”

He is set to take the international fashion stage by storm, but first, he has set his sights on conquering Indonesia. In the works is a ready-to-wear line, a more practical take on Rio’s extravagantly lush creations. “But,” he said, in reference to the future pret-a-porter collection. “I still want to create a line that is true to my character.” That classy with a touch of crazy.