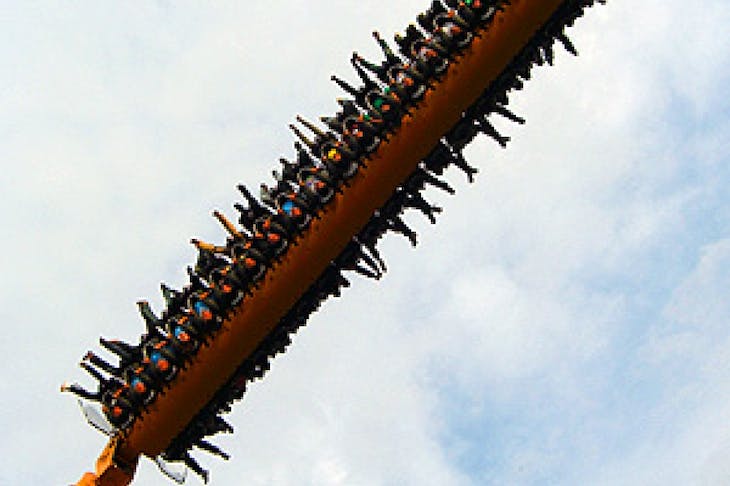 In certain ways, theme parks the world over are all alike. In Asia however, where growing middle classes with disposable incomes hunger after quality entertainment and leisure outlets, theme parks often incorporate cultural elements into their overall thrill packages. This results in parks that are sometimes unconventional, sometimes stunning, sometimes downright wacky, but always wonderful. Arvada Haradiran looks at some of the greatest theme parks in Asia.

Ancol’s DuFan amusement park is simply massive and boasts over 40 rides, attractions and live shows, which are spread out over eight regionally themed areas, namely Indonesia, Jakarta, Asia, Europe, America, Greece, Hikayat (Fantasy) and Balada Kera (Monkey Ballads). Some of the most popular attractions in the park include the recently opened Hysteria, the Halilintar rollercoaster, Kicir-Kicir (nicknamed the Power Surge), an interactive ride called Perang Bintang (Star Wars), the Tornado (a topspin ride), the Istana Boneka (a local version of Disney’s “It’s a Small World”) and the Balada Kera (the Monkey Ballads animatronics show). Other attractions include the Bianglala (a Ferris wheel), Kora-Kora (a swinging ship) and the Poci-Poci (a spinning cups ride). All of the rides in the park comply with international standards and the park is ISO 9001:2000 certified. Ancol has also held several international live-action show premieres over the years, including the X-Men and Wolverine Live Action Shows (which were both world premieres in fact) and the Police Academy Stuntman Show, a first in South-East Asia. Seasonal attractions include the Le Belles cabaret show, a Russian circus and the park’s Euro Kids Circus. www.ancol.com

The 2.7 hectare indoor theme park was inaugurated on 9 September, 2009 (09-09-09!) and consists of four zones featuring 22 rides and attractions and able to hold 5,000 people. These include Studio Central, a Hollywood-themed area featuring 1960s Hollywood architecture, celebrity impersonators and the iconic Walk of Fame; the Lost City, an adventure-themed area complete with expeditions and safaris into a simulated jungle; Magic Corner, an intricately designed fantasy/magical quarter; and Cartoon City, a cartoon-world area designed primarily for kids.

Many of the themes of the rides and attractions in the Trans Studio Theme Park are derived from its parent company’s core businesses, namely the television stations TransTv and Trans7. Thus, Trans Corp, which operates the stations, is the first television company to ever own an indoor theme park. Examples of rides adopted from the televisions stations’ popular shows include Dunia Lain (Another World), a haunted house ride featuring ghosts from the show; Si Bolang, an adventure cum-outbound fun house; Jelajah; Ayun Ombak; and Angin Beliung. Many of these rides however share remarkable similarities with those featured at Universal Studios and Disneyland in the United States, possibly due to the fact that the Trans Studio Theme Park was conceptually designed by the Goddard Group, a Los Angeles-based entertainment firm responsible for many of the attractions at Universal Studios and Six Flags. www.transstudioworld.com

With 26 million visitors annually, this 465,000 square metre mega-complex is truly the king of Asian theme parks. Opened in 1983 in Urayasu in Chiba (part of Tokyo’s megalopolitan sprawl), Tokyo Disneyland was the first Disney park to be built outside of the United States and was constructed by Walt Disney Imagineering in the same style as Disneyland in California and Magic Kingdom in Florida. Featuring attractions such as Cinderella’s Castle, Tomorrowland’s futuristic Space Mountain rollercoaster, Buzz Lightyear’s Astro Blaster, appearances by Minnie and Mickey Mouse, and new attractions based on the movies Monsters, Inc. and Pirates of the Caribbean, Tokyo Disneyland is truly a full-week destination, especially if you consider the fact that the entire resort complex, dubbed Tokyo Disney Resort, features not one but two theme parks (the other park is Tokyo Disney Sea), four hotels, a Cirque du Soleil theatre, various world-class restaurants and a variety of shopping options.

The seven themed areas in the park itself each complement one another, and yet are all distinctly unique in their styles. These areas are the World Bazaar; the four classic Disneylands (Adventureland, Westernland, Fantasyland and Tomorrowland); two Minilands, Critter Country and Mickey’s Toontown. The park is also noted for its huge open spaces, which can accommodate the massive crowds that the park receives on even moderate days. In 2009, Tokyo Disneyland received approximately 13.65 million visitors, making it the third-most visited theme park in the world, behind its American sister parks, Magic Kingdom and Disneyland. www.tokyodisneyresort.co.jp

Still attracting more visitors than the newer Hong Kong Disneyland, Ocean Park first opened in 1977 and remains one of Hong Kong’s favourite attractions. Ocean Park features rides, exhibits and conservation facilities aplenty. Moreover, unlike Hong Kong’s Disneyland, Ocean Park’s typical amusement park rides are also augmented by a marine mammal park, an oceanarium and an animal theme park boasting 11 animal exhibits and rare species such as the giant panda (there are four of these beautiful creatures in total), red pandas, Chinese giant salamanders and Chinese alligators. These beasts are all housed in the Amazing Asian Animals exhibit. In addition, the park is also home to several observatories, well-developed laboratories and an education department.

There’s also a special Whales and Dolphins Fund, and Ocean Park Hong Kong was the first institution in the world to successfully artificially inseminate a bottlenose dolphin. The park has also developed numerous new breeds of goldfish. Located on the southern side of Hong Kong Island, the park is popular with visitors from mainland China, and the city is planning to extend a subway line down to the park over the coming years.

Covering more than 870,000 square metres of land, Ocean Park has now grown to feature 35 attractions and rides, which include Hong Kong’s largest roller coaster, which has a maximum speed of 77 km/h. There’s also a huge helium-filled balloon measuring 22 metres in diameter called SkyFair, which soars more than 100 metres into the sky. Other popular attractions include Ocean Theatre, the Abyss Turbo Drop, the Mine Train, the Giant Panda Habitat, the Jellyfish and Chinese Sturgeon Aquarium, and a four-story aquarium filled with over 2,000 fish. The rides and attractions are spread over three major areas: Lowland, the Headland and Tai Shue Wan. The Summit (Headland) and The Waterfront (Lowland) are separated by a large mountain which has become the distinguishing feature of the park. The three areas are connected by a 1.5 kilometre long cable car system, a train network dubbed the Ocean Express, a shuttle bus service, and most famously, visitors can also opt to take one of the world’s longest outdoor escalators. www.oceanpark.com.hk

Without a doubt, the recently completed RWS Singapore’s primary draw is Universal Studios Singapore, the first Universal Studios theme park in South-East Asia. Developers are hoping to tap into Singapore’s 4.6 million residents, 9.7 million annual tourists and its proximity to the populous countries of Malaysia and Indonesia. Resort World Sentosa Singapore is located on the island of Sentosa, a hunk of reclaimed land, and the integrated resort occupies over 49 hectares of land. The resort boasts, in addition to the Universal Studios theme park, a 15,000-square metre casino, the Equarius Water Park, the Maritime Xperiential Museum, six hotels and various haute-cuisine dining and luxury-shopping options. The world’s largest oceanarium, Marine Life Park, is also on hand and the resort was designed primarily by the renowned American architect, Michael Graves.

Universal Studios Singapore sports a total of 24 attractions spread over a 20 hectare area, and 18 of these attractions are either original or have been specially adapted for the park. The park itself consists of seven uniquely themed zones surrounding a lagoon. Each zone is based on a blockbuster movie or television show, and unique rides, attractions, character appearances and live shows based on hit movies such as Battlestar Galactica, Shrek, Madagascar, Jurassic Park and The Mummy are all featured prominently. The park also features the world’s tallest pair of duelling roller coasters, which are based on the hit television series, Battlestar Galactica. There’s a castle from the worlds of Shrek and Monster Rock and a live musical show featuring the infamous Universal Monsters. In addition, the park has over 30 restaurants and food carts, together with 20 unique retail stores, which are located around the park. www.rwsentosa.com

When it first opened in 1989, Lotte World set the standard for the fully fledged theme park era in South Korea and, along with Tokyo Disney Resort, is generally considered to be Asia’s classiest theme park. Today, Lotte World remains one of the average Seoulite’s favourite recreation destinations and is also the Korean tourist attraction most frequently visited by foreigners. Around six million visitors flock to Lotte World each year and around 10 per cent of these are foreigners. The park’s strategic location in the heart of the city, indoor setting which makes it impervious to the weather, and convenient day and night, year round opening hours have all helped to make Lotte World a better option for time-strapped tourists than its larger yet farther away rival, Everland (which is about an hour’s drive from Seoul).

Lotte World consists of one of the world’s largest indoor amusement parks, an outdoor amusement park known as Magic Island, an artificial island in the middle of a lake, a monorail link, shopping malls, a luxury hotel, a Korean folk museum, sporting facilities, and movie theatres. The outdoor Magic Island area features numerous attractions, including the wildly popular Gyro Drop (a heart-in-mouth vertical free fall), the Gyro Swing, Atlantis Adventure, the Pharaoh’s Fury ride, and its own version of Disneyland’s iconic Sleeping Beauty Castle, in which musical shows are performed.

In the park’s indoor Adventure facility, a World Carnival Parade is held daily from 7:30pm to 8pm, and the Cosmos Circus Laser Show starts at 9:30pm. Of the two, the World Carnival Parade is particularly eye-catching and a superb attraction. The Adventure park features districts which represent different countries and which all feature souvenir shops and some thrilling rides. An ice rink is located in the centre of the park, there’s a folk museum, which usually garners a lot of attention from foreign tourists, a lake, and plenty more besides. The indoor structure cleverly makes use of natural sunlight and is open for visitors all year round, regardless of the weather. www.lotteworld.com

The crown jewel of Malaysian theme parks is undoubtedly the Genting Theme Park, which is a part of Resorts World Genting, an integrated resort situated up in the Genting Highlands that attracted an amazing 19.5 million visitors in 2009. Informally known as the Las Vegas of Malaysia, and also dubbed the City of Entertainment, as it sports the only legal land-based casino in the country, the resort offers six hotels with 10,000 rooms, over 60 top class rides, 170 dining and shopping outlets, some serious mega shows, business convention facilities and other entertainments, all in one location.

Interestingly, one of the biggest attractions down in Genting is the cool climate and the park’s 2,000 metre altitude attracts many Malaysians who are looking to enjoy a little European weather. The Genting Theme Park is also a huge draw however. The resort actually contains three theme parks: the Genting Outdoor Theme Park, the First World Indoor Theme Park and the Water Park. There are over 20 signature attractions on offer, including the Flying Coaster, the Genting Sky Venture, the Haunted House, the Ripley’s Believe It or Not! Museum, SnowWorld, the Space Shot, the X-pedition Wall and the Rainforest Splash Pool. The three theme parks also feature a wealth of rides suitable for families and children, and the park attracts many families through its doors every year. The park can be reached by car from Kuala Lumpur in one hour and there’s also a 3.38 km long monocable gondola lift to enjoy, which has been dubbed the Genting Skyway and which was once the world’s fastest, and South-East Asia’s longest, gondola lift. www.rwgenting.com