A Touch of Dutch in Wayang 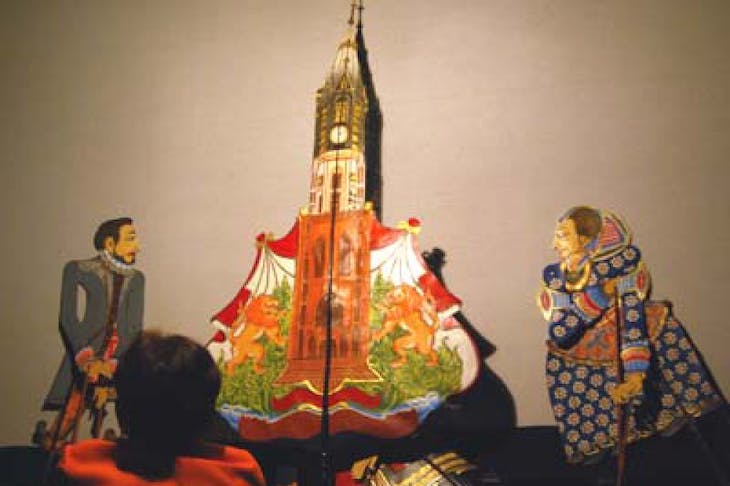 A Touch of Dutch in Wayang

There was no Arjuna in sight. The puppet characters appeared in classic European clothing from the 16th century. And the shadow puppet story was not based on the classic epic Mahabharata or Ramayana — but rather the heroic epic of Prince William of Orange. That particular evening, the audience was given a rare treat — a wayang shadow puppet show with a fresh, contemporary twist. Painted in classic European clothing from the 16th century, the puppet characters became alive as young puppet master Ananto Wicaksono told the heroic epic story of Prince William of Orange to a packed hall at the Erasmus Huis in South Jakarta. Closing scene showcases the puppet characters of Prince William van Orange (left), his wife Louise de Coligny (right) and the Nieuwe Kerk (New Church) in Delft. JP/ Wendra Ajistyatama The Nusantara Museum in Holland had ordered the puppet of William of Orange — or Willem Van Oranje in Dutch — from Javanese puppet maker Ledjar Subroto, Ananto’s grandfather. The puppet show was performed in Jakarta and Yogyakarta before being launched in the Nusantara Museum over the weekend. The story revolves around the battles of Prince William, the proponent of freedom of religion against the Spanish army. The Spanish King, Philip II, declared William an outlaw and promised a reward for his assassination. The show’s last scene depicted the assassination of the Dutch hero. Balthasar Gerard, a supporter of Phillip II, shot William to death at the prince’s home in Delft. The contemporary shadow puppet show did not only present a series of serious political banters and war scenes, but also entertained and humored with creative and amusing scenes. The hundreds of audience members burst into laughter when an old puppet character Jan Klaasen appeared on stage as an intermezzo in the middle of a war. Jan Klaasen’s funny voice, humorous chat and silly movements became an instant ice-breaker. A Spaniard soldier tried to attack his head to no avail because it was so flexible — it could rotate, turning forward and even backward. Ledjar said Jan Klaasen was an additional character that was comparable to Punokawan — four royal jokers in the regular puppet shows. “I inserted the Jan Klaasen character so the audience did not only have to stick to the story, but be entertained by the humor as well,” he said. Known as the innovator of wayang kancil — leather puppets in animal forms, the 73-year-old Ledjar was internationally known for his novel pieces of the wayang art. His creations include Wayang Sultan Agung in 1987, a puppet made to depict the struggle of Sultan Agung against the Dutch troops under Jan Pieter Zoon Coen. The puppet was collected by the Westfreis Museum. Later, he made Wayang Revolusi for the Bronbeek Museum in Arnhem, representing the Indonesian revolutionary figures of 1945. He also created a wayang cartoon based on the Japanese Samurai X comic for the performance of Japanese puppeteer Ryoh Matsumoto in 2002. Ananto, a student of the Indonesian Institute of Arts in Yogyakarta, said the Nusantara Museum planned to introduce Dutch history to school children through Wayang William. “The problem [faced by Indonesia and the Netherlands] is the same. Children are reluctant to study history,” he said, adding that wayang was chosen because both countries shared a strong cultural relationship. The idea to wrap the Dutch history in a wayang story came after officials from the Nusantara Museum watched Ledjar’s Sultan Agung puppet show performance at the Pasar Tong Tong fair back in 2008. The officials, who saw a Jan Pieter Zoon Coen puppet, were inspired to order the puppet character of William. They were happy to see Ledjar’s creation of the William puppet a year later, saying that the puppet’s image matched the prince’s portraits. Ananto said he researched on the Internet to study the history of William of Orange and watched an original classic movie about him. “At first, I was thinking of full gamelan for the music, but then I changed my mind because this was a European puppet show. I don’t want to make it an ordinary wayang purwa [traditional puppetry],” he said. His effort paid off. The Willem puppet show performed in the Erasmus Huis was far from boring. The music was a collaboration between pop orchestra and traditional gamelan. Some of the conversations in the show, which included an English translation, were even set to opera-esque music, such as during a romantic chat between William and his fourth wife Louise de Coligny. Ananto, who has been a wayang puppeter since he was four years old, said the Nusantara Museum’s visitors could also watch his 15-minute animated film of the William puppet show in addition to enjoying the real puppet performance. The museum also plans to tour the puppet show around several cities. Ledjar said the marriage of modern and traditional genres could attract young people. The most important thing, he added, was to preserve the traditional nuance. However, nowadays the majority of appreciation for wayang comes from foreign countries like the Netherlands, and little attention is paid to the art form in Indonesia. Ledjar said no order to make a wayang show about Indonesia’s modern history had come from his his own country. “You know, there is no interest here in Indonesia. I am concerned about how to encourage our children and young generation to love wayang.” Puppet master Ananto performs a battle scene during the shadow puppet show at Erasmus Huis in South Jakarta. News Source : Jakarta Post

Daftar komentar untuk artikel "A Touch of Dutch in Wayang"