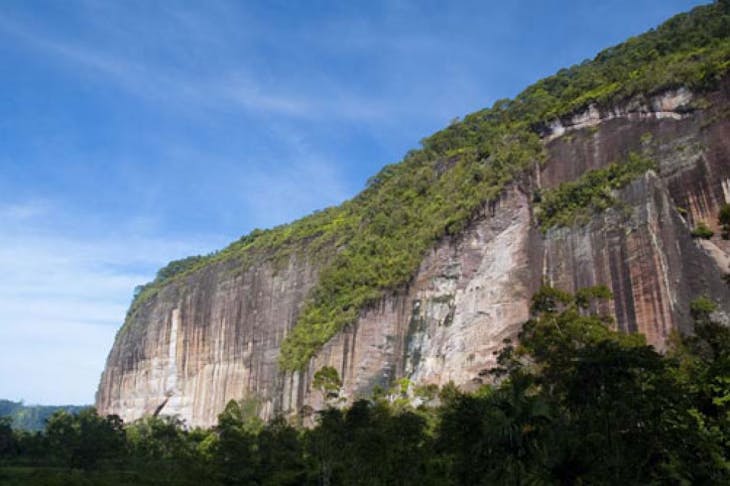 The Minangkabau ethnic group lives in a fertile region containing three valleys, which have developed into the heart of West Sumatran culture. Fadil Aziz visited this beautiful part of Indonesia, an area which has given the country many first class diplomats. As the story goes, the Javanese once attacked the land of Minang. Being outnumbered, some wily locals proposed a contest of strength between a Javanese water buffalo and a Minang one. While the invaders provided a huge buffalo, the Minangs put up a small beast who had not been fed for days, but which was armed with a knife on its nose. To cut a long story short, the scrawny buffalo won! This local legend, it is claimed, spawned the term minang-kabau meaning, “The winning buffalo”. Minangkabau is the name of the ethnic group that lives in the Bukit Barisan mountains. Sometimes people confuse the Minang people with those from Padang, whereas in fact, Padang is the name of the capital of the Province of West Sumatra. Any examination of the Minang people has to take in the fertile plateau of West Sumatra, which is surrounded by three valleys and three mountains. The Minang elders call it Luhak Nan Tigo, while historians have dubbed the area, “The Three Valleys”. It is on this plateau that this famous ethnic group, with its many agricultural traditions, developed its culture and identity. The area’s core region is divided in two: darek and rantau. Darek refers to the interior. Among the many mountains and valleys in this region, three are called luhak, which actually also means “region”. They are Luhak Limapuluh Kota, Luhak Tanah Datar and Luhak Agam. Having been inhabited and cultivated for centuries, it is this Luhak Nan Tigo which is now referred to as Alam Minangkabau or the “Land of Minangkabau”. From these three luhaks, the members of the Minang ethnic group spread to the other valleys, and some even left Sumatra altogether. Meanwhile, rantau is the term used for places located beyond Luhak Nan Tigo.

I started my exploration in the well-liked city of Bukittinggi, which is located right in the heart of Luhak Agam. Lembah Anai, which is popular for its waterfalls, can be found along the route to this town, which was founded in 1825. I enjoyed a delicious meal in Padangpanjang: Sate Mak Syukur, known as SMS. The main menu consisted of a generous portion of smooth-textured meat served with some yellow soup and jangek crackers. The economic machine moves fast and has carried Bukittinggi away from its past, and many of the city’s charming old shop houses have now been overshadowed by fancy shopping malls. This encroaching metropolitan ambience is something of a shame, as one of the primary attractions of this city, which lies a full 900 metres above sea level, is actually its old fashioned feel. Several well-known Indonesian personalities were born here, including the journalist Abdoel Moeis, the writer Taufiq Ismail, the historian Taufik Abdullah, and the Republic of Indonesia’s first Vice President, Bung Hatta. The city’s little remaining heritage includes Jam Gadang, Fort de Kock and the Bung Hatta Museum. Other attractions include Pasar Ateh and Pasar Bawah (Upper and Lower Markets). These two places are like theatres built to showcase the trading abilities of the Minangs, in addition to, of course, their expertise in concocting hot spices. Must try dishes here include nasi kapau or kapau rice in Uni Lis and dadiah, which consists of dried buffalo milk inside bamboo stems. The city, flanked by the Mountains of Singgalang and Marapi, also offers visitors Ngarai Sianok, a beautiful, nationally renowned, green valley. The best time to enjoy Ngarai Sianok is in the morning. It was evening however, and so I walked along Jalan Ahmad Yani and Jalan Cinduamato, where many restaurants can be found. Local dishes on offer here include martabak kubang or martabak Mesir, which are both Bukittinggi specialities. There are also various curries, green chilli duck and smoked fish to check out.

On my travels I also stopped off in Kotogadang, a region that produces silver, which is only a few kilometres from Bukittinggi. It is here that Indonesian national hero Agus Salim was born. His cousin, Rohana Kudus, an independence fighter, as well as a female pioneer of the Indonesian press, was the founder of the Craft House of Amai Setia, which is still in operation. History notes that in 1912, Rohana founded Sunting Melayu, the first women’s newspaper in Indonesia, whose editorial staff and writers were all women. Several kilometres to the south of Bukittinggi, I found Pandai Sikek, the centre of songket craft. Songket is a Minang fabric embroidered with gold and silver threads, and Indonesia’s fashion houses offer various types of songket, which are priced from hundreds of thousands to millions of rupiah. If you’re lucky, you can witness the process of making this traditional fabric firsthand. “As far as the eye could distinctly trace was one continued scene of cultivation, interspersed with innumerable towns and villages, shaded by the coconut and other fruit trees. I may safely say that this view equalled anything I ever saw in Java. The scenery is more majestic and grand, the population equally dense and the cultivation equally rich.” This quote is from a report written about Minang by the Lieutenant Governor of Java, Sir Thomas Stamford Raffles. When Raffles was visiting, Padang was controlled by Great Britain (from 1795 until 1819 in fact). What the founder of Singapore described almost 200 years ago still applies however, and not far from Bukittinggi I encountered beautiful views of green paddy fields, which were overlooked by lush, green mountains.

If you’re really after beauty though, then Lake Maninjau has it in spades. Located in the Embun Pagi region, Maninjau lies 600 metres above sea level and is three hours from downtown Padang. It was here that I looked upon a simply lovely lake surrounded by cliffs, green paddy fields, mosques and smaller prayer houses, which all peeped out from among the palm trees that fringe its shore. One element that has not changed is the bluish colour of the lake’s water. The beauty of Maninjau was also once etched into the heart of Bung Karno, who visited the lake in 1948. The first President of Indonesia even dedicated a rhyming poem to her. Another ideal site from which to enjoy views of Maninjau is Puncak Lawang. Laying to the north of the lake itself, Puncak Lawang is believed to be the highest point of this ancient region. In fact, Lake Maninjau sits in an ancient volcanic crater and even now, from time to time, poisonous gas sometimes wells up from its bed and kills the locals’ fish stocks. In Puncak Lawang, visitors can also witness traditional sugar cane juice processing. The building where the juice is produced is hidden behind bushes and the process itself is unique to the area. The juice from the sugar cane is extracted using buffalo power. With its body tied to an extractor, the plump beast’s eyes are blinkered and it is led around and around. It’s an environmentally friendly process which was invented by the ever resourceful Minangs. From Puncak Lawang, I headed downhill for two hours towards Bayur on the lakeside. The panorama down here was no less enchanting. Around 36 kilometres from Bukittinggi, Maninjau exudes an ethereal atmosphere, despite certain areas being dense with Minang villages. Traditional wooden houses still exist here and the longstanding tradition of market days is still observed by the lake’s people. With its bucolic simplicity, this stunning lake has become a tourist favourite. Some visitors like to savour the beauty of the region whilst pedalling their bicycles along the flat tracks through the villages on the shores of the lake. Others just like to relax and take a dip in the calm waters. It feels right that Tanah Datar is referred to as Luhak Nan Tuo or “the old region”, as the kingdom of Minang stood on this site for 500 years between the fourteenth and nineteenth centuries. Minangkabau may now have been infiltrated by waves of modernisation but the people here continue to faithfully preserve their traditions. In this respect, Tanah Datar is a little like Yogyakarta in Java.

Tanah Datar is flanked by Mount Marapi, Mount Malintang and Lake Singkarak, and the most famous spot in this fertile valley is the Pagaruyung Basa Palace, a replica which records the traditional life of the people of Minang (the original palace actually stood on a different site and was destroyed hundreds of years ago). The palace’s collections include gadang houses, with roofs in the shape of buffalo horns and special compartments for women. I also took a look at the various carvings on display, portraying various moral messages. For the locals, a house quite clearly has a social function above and beyond merely being a place in which to sleep at night. If you are not all that keen on looking at a mere replica of a gadang house, then there are some originals still standing in several kampongs and nagari in Tanah Datar and Luhak Limapuluhkota. In Tanah Datar, traditional houses can still be found in Pariangan, Sulit Air, Belimbing, Dusun Tuo and Tabek Patah. Rumah Tuo Kampai Nan Panjang in Belimbing, for example, has stood for an impressive 350 years. Meanwhile, in Limapuluhkota, these fascinating traditional houses can be found to the north of Payakumbuh. Minang tradition holds the principle of deliberation to reach consensus in very high regard. That is why there is a balai adat or traditional public hall in almost all of its regions. Balairung Sari Tabek, an authentic traditional hall, is a long building with a thatched roof, and is a highly valued cultural asset. This architecturally simple building is made of timber and its interior has for generations born witness to countless call-and-refrain poems sung during traditional consultations.

Shrewd debating skills are indeed the main weapons of the Minangs, and are handed down from one generation to the next, rather like a genetic trait. History records that many of Indonesia’s top class diplomats have Minang blood flowing in their veins, including Bung Hatta, Agus Salim, Sutan Syahrir, Mohammad Yamin and Mohammad Natsir. These were stars in the country’s struggle for independence, not on the battlefields, but at the negotiating tables. How to get there Enjoy Padang 3 Days 2 Nights starting from IDR 2,403,000 Itinerary: Package includes: Package excludes: Flight schedule