Travelling in Indonesia by Motorcycles 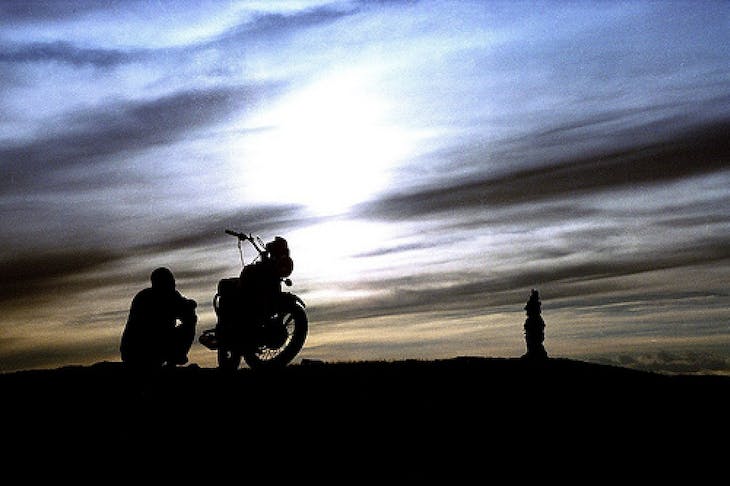 Travelling in Indonesia by Motorcycles

Not content with the availability of reliable information about the lives, history and customs of countless indigenous people scattered throughout Indonesia’s 17,000-plus islands, two intrepid journalists loaded up their touring motorcycles and set out to do the job themselves.

During their 10-month expedition they dubbed Zamrud Khatulistiwa, or the Emerald of the Equator, they visited over 80 islands throughout the archipelago.

“The existing data about Indonesians living on small islands is very poor. We hardly knew anything about their daily activities,” said Ahmad Yunus, a 30-year-old Bandung-based journalist involved in the project.

“We wanted to blend in with the people, especially on the small islands, so we could get a firsthand view of their way of life.”

The idea took shape, Yunus ?said, after a motorcycle trip that a senior journalist, Farid Gaban, was scheduled to take, to study coastal populations in Indonesia as part of the Millennium Development Goals project, was canceled.

“Perhaps the project didn’t go anywhere because it was too big and needed too much preparation,” Yunus said.

Whatever the reason, Farid, who already had his heart set on the journey, decided to take a similar trip on his own.

A week before he was scheduled to depart, Farid called Yunus and asked if he was interested in joining him on the trip.

Yunus said he initially felt nervous about the prospect of island-hopping with a motorcycle, but that he was too excited to pass up the opportunity.

With a budget of Rp 250 million ($ 30,000), Farid and Yunus set out from Jakarta in June 2009, kicking off what would become known as the Zamrud Khatulistiwa expedition.

With the exception of one setback that required them to return to Jakarta, the two didn’t stop traveling until they wrapped up their trip in June the following year.

During the trip, Yunus said, he and Farid tried to always take the less traveled route. It was an idea that led them to many amazing discoveries, but the road was often far from smooth, literally.

“The roads we took were often not paved and required us to cross rivers,” Yunus said. “But it was worth it because our goal was to see areas with poor infrastructure. Turns out there are plenty of these areas to see.”

The duo often had to pay a heavy price for their curiosity.

“There were times when Farid, for example, was not sure whether we could, or should, continue the journey,” Yunus said. “But the endless possibility for surprise around each new corner was what kept us going.”

During their trip, the duo took more than 10,000 photos and recorded 70 hours of video footage. While on the road, they both kept travel journals and regularly posted stories on the social networking Web site Facebook. They also kept a travelogue at Zamrud-khatulistiwa.or.id. The information gathered was all meant to be used in several books and documentary films.

“We have finished the video that tells about our journey in general, but are still preparing the book. Hopefully it will be on shelves by the National Awakening Day in May,” Yunus said.

During the trip they stayed mostly in the homes of locals, mosques or portable tents.

“We stayed anywhere but in hotels,” he said. “Spending more time with the locals is one of the best things you can do because you get to see things more closely.”

This, Yunus said, did not only give them the chance to observe the lifestyle of the people, but also to learn more about the history of their own country.

“We discovered, for example, that there are islands that we’d never heard of that turned out to have significant historical value,” he said. “It is amazing that they are a part of Indonesia and we had no idea that they existed, let alone their history.”

Sad discoveries about people living on small islands, Yunus said, were also part of the journey.

It is incomprehensible that there is a large number of areas so rich with natural resources but the people there are struggling economically,  he said.

On one of the islands, for example, the term janda kompresor, or the compressor widows, is a popular term, Yunus said.

“It refers to women whose husbands died while using faulty compressors when diving for sea cucumbers,” Yunus said. “These guys had no idea that what they do is very dangerous. There hadn’t been any safety training given to them.

“Government policies often don’t trickle down to areas at the very bottom. This is why social gaps occur.”

Another example, Yunus said, is a shack on Enggano ?Island in Bengkulu ?province that serves as the local airport terminal.

“The locals said there have been promises made by the government to build public facilities such as a proper airport and hospitals, but they have never been fulfilled,” he said.

Another alarming discovery is the way the exploitation of natural resources in remote areas — often by big multinational conglomerates — is affecting large numbers of inhabitants.

“The Kapuas River is now a place where children can play football during the dry season because it becomes extremely dry,” Yunus said. “And during the rainy season, there will be floods.”

Yunus said the root of the problem is the lack of regulations in the way the water is diverted upriver from these small villages.

Talks and plans to develop these remote areas, he said, have never really been followed through, leaving the people that inhabit these islands far behind the rest of the country.

“When you read the newspaper, quotes from ministers and the president might lead you to believe that everyone’s needs are being met,” Yunus said. “But when you go out there, especially outside Java, life is not as good as it might sound in what you read.”

Yunus said that he knows the expedition’s findings might not be able to change the harsh conditions, but he is proud that both he and Farid have carried out their responsibility as journalists.

“We went there, talked to the people and reported on what we found, even if it wasn’t all about Indonesia’s natural beauty,” he said.

Yunus also said he hopes their journey will inspire other Indonesians.

“We would be very happy to share all of what we found with everyone. Not only with fellow journalists, but we would also love to go to schools, malls, markets — anywhere other people can see it. “It is sort of like a reminder to us all of what today’s Indonesia is really like.”