Moving Indonesia from Good to Great: What Does it Take? 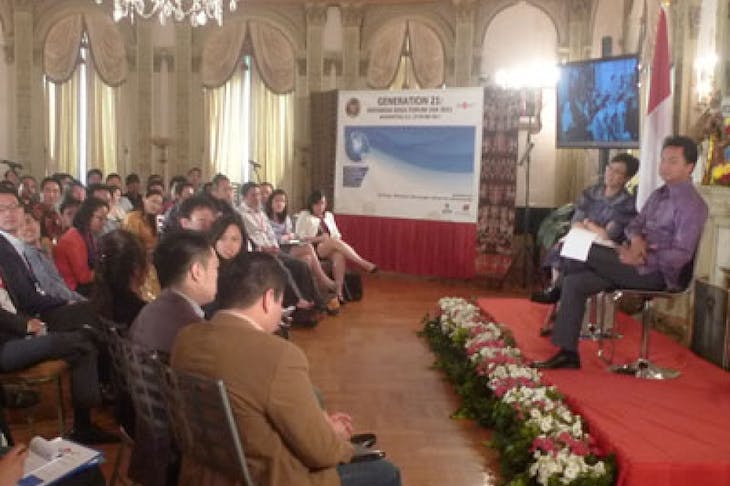 Moving Indonesia from Good to Great: What Does it Take?

As GNFI reported earlier, from the 27th to 29th of May, 2011, Indonesia Forum Generation 21 was held in Washington, D.C, gathering about 100 Indonesian students and young professionals in the United States to share their visions and ideas for Indonesia future. Below is a report by Mr. Endy M. Bayuni of The Jakarta Post. --------------------------------------------------------------------------------------------------------------------------------------------------- Indonesia is doing well relative to most other countries in the world, boasting a functioning democracy that has not only provided political stability, but one that is also starting to deliver the economic dividends. Accolades like “the third largest democracy”, “a democracy in the country with the world’s largest Muslim population” and membership of the G20 club of the largest economies in the world, all of these can be intoxicating that some may feel Indonesia just needs to keep doing what it has been doing since it launched economic and political reforms in 1998. But a group of about 100 Indonesian students and young professionals who live in the United States were assembled in Washington DC last weekend to answer the question: What does it take to move from good to great and put Indonesia on par with the best of nations in the world? “What is your historical achievement?” Indonesian Ambassador to the US, Dino Pati Djalal, asked participants of the “Generation 21 — Indonesia Ideas Forum USA 2011”. The two-day gathering during the Memorial Day long weekend in the US has an even loftier subtitle: “Transforming 21st century Indonesia into a nation of innovators, entrepreneurs, pioneers and champions”. Preceding generations made their contribution that they are referred today by the year they made their mark: The Generation of 1908 who launched the first nationalist movements, Generation 1928 for the Youth Oath declaring one country, one nation and one language, Generation ‘45 for the Independence Proclamation, and Generations ‘66 and ‘98 for people-power movements to end dictatorships. A common thread running through all these milestones in Indonesia’s modern history is that they were driven by young people who broke themselves free from the chains imposed on them, whether it was colonialism, feudalism or authoritarianism. They changed the course of history. Dino said the young generation of today potentially “can be the best ever” in advancing the cause of the nation further to greatness. They are better educated, are economically much better off, and are far more connected with one another and with the rest of the world, thanks to the information and communication technology. “If ever there was a time to turn the nation from good to great, that time is now,” said Dino, who moved to Washington in October after serving as adviser to President Susilo Bambang Yudhoyono for six years. Dino founded the Modernisator, which co-sponsored the weekend gathering with the Investment Coordinating Board. The discussion heard from Sri Mulyani Indrawati, the former finance minister and now managing director of the World Bank, who talked about the idealism that drove her in reforming the Indonesian bureaucracy and the World Bank; businessman Peter Gontha who discussed the challenges of making it in the complex business world; Paxton Baker, an African-American who talked about making it in the US music and sports businesses. There was never short of ideas coming from the floor made up of graduate and undergraduate students from various states as well as young Indonesian professionals, some of whom work at major US technology outfits like Yahoo! and Google. The floor was fairly divided over whether Indonesia needed 10 or 20 years to turn that vision of becoming a great nation into reality. While most everyone agreed that a better education system is key to Indonesia’s greatness, Dino provoked a heated debate when he asked whether foreign universities should be allowed to operate in Indonesia just as they do in neighboring Singapore, Malaysia and countries in the Middle East. Nationalism continues to be one of the hot buttons among Indonesians in the US, even though virtually every one in the room said they regarded themselves as Indonesians first and foremost before their racial, ethnic or religious identities, and even though most of them agree that foreign investment does more good than harm in Indonesia. The theme of the event was picked up from the book Good to Great: Why Some Companies Make the Leap … and Others Don’t by Jim Collins who looked at the reasons why the stock of 11 companies far outperformed others among the 1,435 he surveyed over a 40-year period. Collins has since written a follow-up shorter book looking at greatness among non-profit organizations. How can the values and principles that drive companies and non-profit organizations into greatness be applied to the entire nation? Paxton told the audience they should not sell themselves short on their dreams. “Dare to dream to be great, but also be humble to yourself,” he said. Relating to her own experience in breaking down the resistance to reforms in the Ministry of Finance, Sri Mulyani said, “Moving from good to great also means making the impossible possible.” Sri Mulyani, considered an icon for reform in Indonesia, said young people must constantly nurture idealism in the face of pressures for pragmatism as they grow older. “Without idealism, it is easy to compromise principles and your position [in power].” All the speakers emphasized the need to move away from the negative if not cynical mindset prevalent among many Indonesians today, fueled by the barrage of bad news that dominate the headlines, in spite of the progress Indonesia has been making. A group of young Indonesians have put together Good News From Indonesia (www.goodnewsfromindonesia.id), an online news service compiling the more positive news coming from the country to try to tip the balance. Peter Gontha said that as a businessman, he too at times did not feel all that optimistic about Indonesia, “But I put my cynicism aside, and get on with it.” News Source: The Jakarta Post (by Endy M. Bayuni) Main Image: JP/Endy M. Bayuni

Daftar komentar untuk artikel "Moving Indonesia from Good to Great: What Does it Take?"