Beauty With A Badge 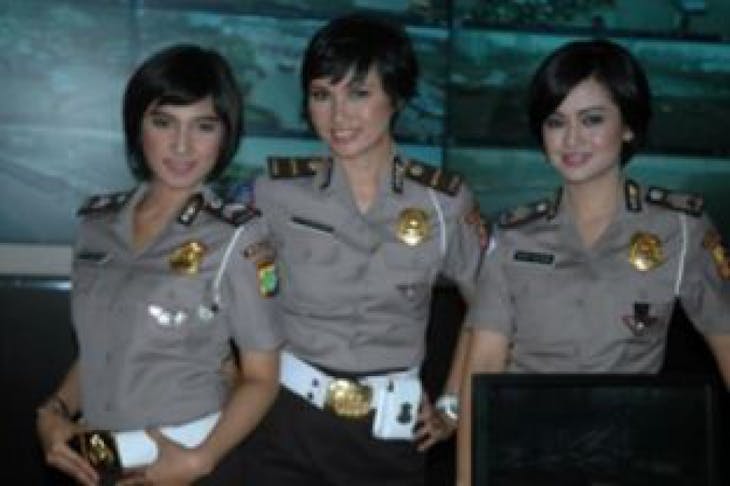 Beauty With A Badge

There's First Sergeant Eka Frestya, whose exotic, model-like features often stop male motorists dead in their tracks when she hands them tickets for driving recklessly. Not just a pretty face, the 23-year-old went undercover to help bust a drug dealer last year. There's Second Lieutenant Eny Kuswidyanti, who has enthralled viewers on a TV cooking show, where she helped to make a dessert called “motley traffic light.” She declined to give her age, but her impish looks suggest she is in her late 20s or early 30s. And there's Sergeant Avvy Olivia, 28, who could well be a teeny-bopper pop star but who appears on MetroTV as well as on Jakarta's streets to direct traffic. Together, the trio of attractive police officers are leading a charge by Indonesia's embattled police force to improve its image. “The public love having clean, nice-looking personnel serving them,” said Sgt Avvy. “This makes them feel happier and more likely to follow traffic regulations.” Their deployment follows a number of surveys which have put the police force in a bad light, mirroring long-held accusations of graft and incompetency. In 2008, Transparency International Indonesia ranked the police force as the most corrupt institution in the country, citing rampant cases of bribery. And last December, only 37 per cent of university students said in a survey that the police performed well. But now, 1st Sgt Eka, 2nd Lt Eny and Sgt Avvy are trying to improve the police's tarnished image. Since late last year, they and several other female police officers have been appearing on MetroTV to deliver updates on road conditions. This is in addition to their daily duty of directing the traffic on Jakarta's streets. The attractive officers were selected from dozens of candidates proposed by various offices and departments within the police force. The successful ones were then put through presentation classes under the tutelage of Mudakir Rifai, a former creative director at SCTV. “To serve the public well, to communicate effectively, you need to present a good package,” he said. The Royal Malaysian Police also plan to station good-looking, smart and personable police officers in front-line positions, they say, to present a friendlier and accessible image to the public. For now, the publicity efforts by the Indonesian police seem to be working ? at least for many men. On Friday, the pretty police officers raised many eyebrows and drew smiles when they distributed roses to passing drivers on busy roads. “They are too beautiful for police officers,” said an impressed Hajoran Siregar, 39, a bank officer. Reprinted courtesy of Straits Times Indonesia. To subscribe to Straits Times Indonesia and/or the Jakarta Globe call 021 2553 5055. Source: The Jakarta Globe