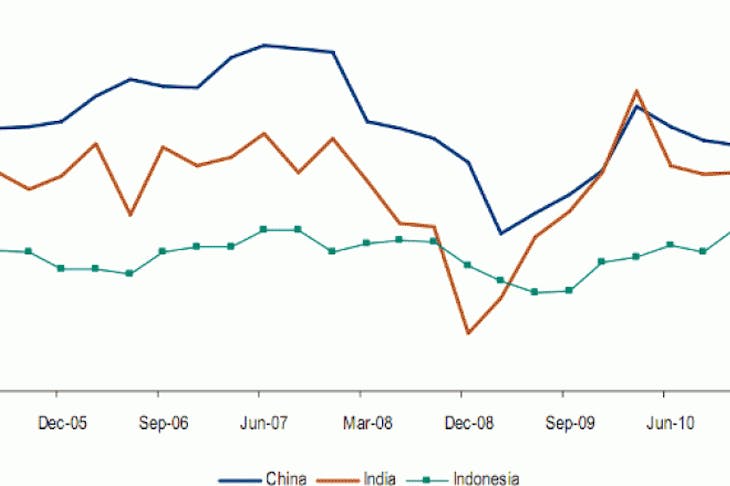 Indonesia has one of the strongest banking sectors in the region today — if not the world. The country’s lenders are well-capitalized and extremely well-managed. This has allowed local banks to raise capital to expand their loan businesses, in some cases by more than 20 percent. The country is also enjoying the benefits of high commodity prices and relatively stable inflation. These factors have enabled Bank Indonesia to keep interest rates steady for more than five months now, further fueling the commodity boom. The central bank deserves enormous credit for managing the country’s economy in a fashion that has encouraged investment and growth. On Tuesday, it once again prudently maintained its benchmark interest rate at 6.75 percent, a decision that will boost overall economic growth. Indonesia’s decision contrasts with those of neighboring countries in the region, where inflation fears have pushed central banks to raise rates. China’s central bank, for instance, raised its benchmark rate for the third time this year to combat high real estate prices and cushion the blow of volatile energy costs. The challenge for BI will be to sustain this stable economic climate, which is attracting investment in various industries and is propelling growth. The Finance Ministry has projected a growth of 7 percent next year, a rate that the economy may well outperform. With the current rate of investment, real sector growth is forecast to be as high as 10 percent. This has given the government a golden opportunity to increase its investment in infrastructure over the next five years. With investor interest the strongest it has been since the 1998 financial crisis, the country is well-positioned to climb up the economic value chain. With this level of growth, there is enough fiscal room for the government to offer greater tax incentives to companies who invest in green projects or undertake research and development. The current commodity boom will not last forever. We must be prepared for when prices start to decline. A strong manufacturing base will help us ensure that the economy continues its upward trajectory for many years. Indonesia must not lose this chance to put the building blocks in place for future prosperity. While the current favorable conditions are expected to continue for some time, we cannot take them for granted. Source: The Jakarta Globe

Daftar komentar untuk artikel "Up, Up and UP!"