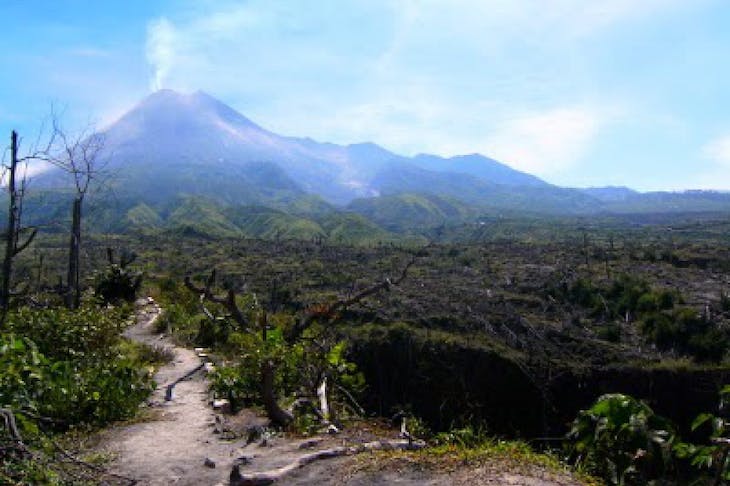 By Faisal CahyadiThe day is shiny. The sky is clear enough at Pronojiwo view point, situated 800 m above sea level, to enjoy a mesmerizing view of Mt. Merapi, the most active volcano in Indonesia, if not in the world. The place is located at Kaliurang, north of Yogyakarta. Having busy with my weekdays, on Saturday I decided to head north for a hike with some friends of mine. I was actually heading for Bebeng, another famous view point in Northern Yogyakarta. Two weeks earlier a ranger had told me that I can reach Bebeng through Tlogo Putri, a bus terminal and one of few entrances to the woods around Kaliurang. Later I found the trail was ruined by the last Mt Merapi eruption. A ranger at Tlogo Putri suggested that the trail was abandoned at some locations due to many fallen trees around. During my talks with the ranger, I noticed a signboard near the gate: Pronojiwo 800 m. As I walked further I can see what the ranger mean. Around us are broken trees, fallen to the ground, had been scorched by the hot ashes from Mt Merapi, along with many shattered rest-camps and signboards. However, the grass and small plants were slowly recovering, giving life to the hills and surrounding places. My friend and I were astonished and took a lot photos along the way. Shortly after, we met couple of guys from Holland who also enjoying the scenery with a local tourist guide. After saying hello and a little talk, we left them with him. As we went further and they were already lost from the sight, I was kind of regretting for not asking their opinions on the place. It could have been a nice piece for this story.

Spent nearly two hours walking and taking photos including some rests, we finally reached the view point. And all of sudden we were stunned by a jaw-dropping scene in front of us: barren hills and valley, dried rivers and the majestic Mt Merapi sticking out of thin clouds against the background of a mostly clear and blue morning sky. What amazed me more than anything was the extent of last eruption, not only to the surrounding areas but also to the Mt Merapi itself. This wonderful mountain was kind of (almost) split in half. The crater was getting bigger and the cleft was spreading all the way down. Should it erupt again in the future, I cannot imagine what it could be.

For those who love some sort of outdoor activity, I recommend you to visit this place. The trail is easy even for a beginner. Just bring with you some foods and water inside your day pack and you are pretty much ready to go. Enjoy the magnificent view and you will love Indonesia more than ever! *PS: I am still wondering what the Javanese word ‘Pronojiwo’ mean. Anyone? :) ... I also posted the Indonesian version on my personal blog.