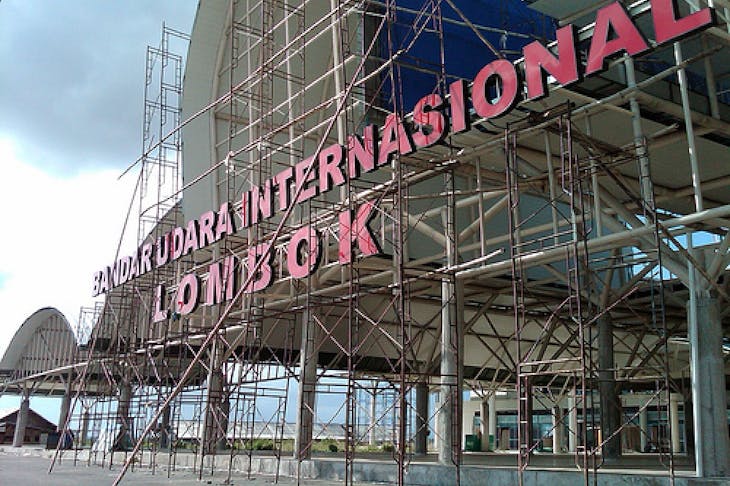 West Nusa Tenggara or NTB province near Bali Island will soon see the completion of its Lombok International Airport that can also accommodate Air Bus 330 or Boeing 767 aircraft. Lombok International Airport (BIL), located in Tanah Awu, Pujut sub-district, Central Lombok district, is about 40 kilometers south of the old Mataram Selaparang Airport. The BIL worth 945.8 billion rupiah has a passenger terminal measuring 21 thousand square meters or four times wider than that of Selaparang Mataram Airport which is only 4,796 square meters. One US dollar is about 9,000 rupiah. The operational and technical director of state-owned airport management company PT Angkasa Pura-I, Haryoso Catur Prayitno, said in Central Lombok recently, the BIL`s passenger accommodating capacity is three million passengers a year with a parking area of 17,500 square meters, while Selaparang airport`s parking lot is only 7,334 square meters. In addition, the BIL has a runway of 2,750 meters x 40 meters square, so it can accommodate ten Air Bus 330 or Boeing 767 air planes, Haryoso said. The Lombok International Airport, according to Harsono, is located on 551 hectares of land, which is about 40 kilometers south of Mataram Selaparang Airport. Haryoso made the statement when accompanying the NTB governor M Zainul Majdi at time of inaugurating the accelerating program of the road infrastructure development in Praya, Central Lombok district on Saturday (July 30/2011). President Susilo Bambang Yudhoyono is expected to inaugurate the Lombok International Airport on October 1 this year, the governor said. "The president will inaugurate the airport. He even has asked the state secretariat to manage a two-day lodging in Central Lombok," the governor said. The governor knew the president`s readiness to inaugurate the international airport when he met President Yudhoyono at the presidential palace in Jakarta on July 21, 2011. His meeting with the president at the moment relating to the matters of governance and development in the region. Governor M Zainul Majdi is chairman of the Democratic party provincial executive board, while Yudhoyono is the chief patron of the ruling Democratic party. In addition to inaugurating the airport, the president is also expected to have meeting with Malaysian Prime Minister which will take place in Central Lombok district. In the meantime, Vice President Boediono when visiting NTB province on July 11, asked the airport management company PT Angkasa Pura-I, Haryoso Catur Prayitno to accelerate the airport construction development. "The sooner is the better," the vice president said, adding that the Lombok International Airport is important for the NTB`s economic development, especially relating to the provincial wish to prioritize the tourism development. "I feel since the beginning that this is the key point for NTB`s further development. It`s very strategic, especially when tourism is managed as the provincial focus of attention, so airport is very important," Boediono said. The Vice President then got around the Lombok International Airport terminal building that is still unfinished yet. "God willing, on September (red.) 30, everything is finished so it can be fully operated on October 1," Haryoso said, explaining that the airport simulations will be conducted on September 5-8, 2011. Actually the Lombok International Airport was initially expected to be operational in July 2011, but it was postponed due to the expansion of the airport terminal area from 14,000 square meters to 21,000 square meters. Thus, the BIL project work was increased. NTB has a number of tourist resorts, among others the Senggigi beach, Cakranegara, Gili Air, Gili Meno, Gili Trawangan, Gili Bidara, Gili Lawang, Narmada park and Mayura park. Apart from that, Mount Rinjani, Kuta Beach Lombok, the water falls of Sendang Gile, Tiu Kelep, Benang Stokel, Benang Kelambu. The Lombok Island topography is dominated by the Mount Rinjani (3,726 meters above sea level) which is the third highest in Indonesia. Aside from that Lombok also offered its culinary including "Ayam Taliwang" or a kind of fried chicken and "Plecing Kankung", vegetable like sauteed kale which can lure more tourists to come. In many ways, Lombok is similar to Bali, and foreign tourists began recognizing Lombok in the decade of the 1990s. About 80 percent of the Island population is the Sasak tribe, a tribe that is still close to the Balinese ethnic, but mostly converted to Islam. The remaining population is Balinese, Javanese, Chinese and Arabic. With lots of tourism potentials, the NTB province has a dire need to have an international airport because the aviation transport limitations has so far become one of obstacles to develop tourism sector in this province towards the Lombok-Sumbawa 2012 Visit. The Lombok-Sumbawa 2012 Visit has targeted as many as one million tourist arrivals in this province. News Source: ANTARA News