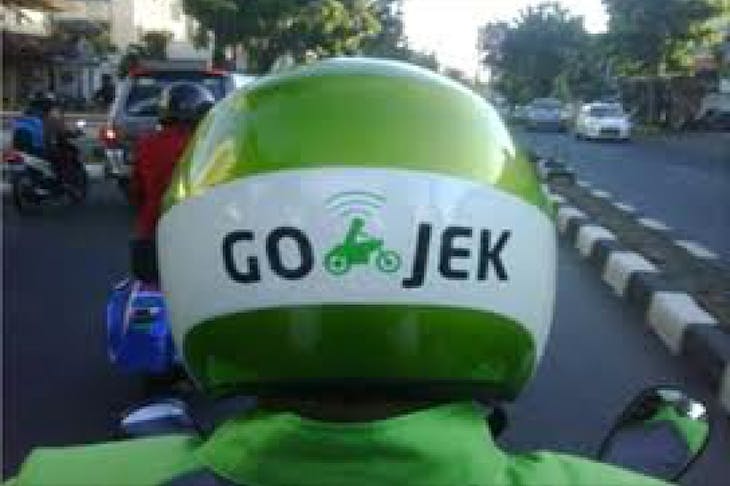 An American entrepreneur who has invested in Indonesian start-up Go-Jek is confident the motorcycle taxi company can one day take on the world. “Go-Jek is currently preparing a larger business plan,” Arthur Benjamin told the Jakarta Globe during his recent visit to the country. The 64-year-old said Go-Jek’s Jakarta business model could be replicated overseas. In the next five years, he said, Go-Jek could expand to cities that share the same sort of traffic characteristics as Jakarta, such as Bangkok and Shanghai. “I do not think it will work in the US, because there are hardly any traffic jams, and there are fewer motorcycles [than in Indonesia],” Benjamin said. Go-Jek was the winner of the Global Entrepreneurship Program Indonesia on July 22. The Jakarta-based company, which manages a transportation and courier service by motorcycle taxi, was founded about a year ago by three Indonesians — Nadiem Makarim, Brian Cu and Michaelangelo Moran. It managed to capture the US angel investor’s attention during a week of networking events held by GEPI. An angel investor is an investor that puts money into early-stage businesses that offer high returns, but also high risks. Motorcycle taxis are common in developing nations such as India, Vietnam and Thailand. In developed countries, including the United States and in Europe, the service is more likely to cater to a niche market. Go-Jek has formed partnerships with 200 ojek (motorcycle taxi) drivers across Jakarta. It has more corporate clients than personal ones and receives about 60 bookings a day through its call center. Ojek drivers pick up passengers, deliver parcels and perform other services. In the next year and a half, Go-Jek plans to double its work force. “A potential start-up should have three elements,” Benjamin said. “A good idea that is marketable and has the potential to grow; solid management with a good leader, as well as a good operating manager and financial manager; and sufficient capital to launch,” he said. By “sufficient” he meant having a capital reserve of at least 10 percent of total estimated funds needed to start the company. Asked whether Go-Jek’s business model would be sustainable, Benjamin said it remained to be seen. Nevertheless, he said the business was suitable for cities where traffic was heavy. Benjamin’s focus is developing the company’s call-center operations and helping it grow and become a mature company, either by merging with a larger entity or listing on the stock market. Based on Go-Jek’s business plan, Benjamin said the company could become profitable by next year. “The return of investment could take five to seven years,” he said. As an angel investor, Benjamin said he only invested in companies with high growth potential. “The American companies that I have invested in usually generate up to 10 times the return of investment between that period,” he said. Standard practice in the United States is a return of three times the investment in five years, he said. Benjamin’s visit to Indonesia was his first, and he said he was impressed by the entrepreneurial spirit here. “I came to Indonesia as a participant in GEPI with no plan to invest,” Benjamin said, declining to disclose details of his minority stake in Go-Jek. “Indonesia is a promising country with high user density of Internet and hard-working young people. I am sure that Go-Jek will attract other companies.” Learn more about Go-Jek at www.go-jek.com News Source: Jakarta Globe