"This time, they are dead serious"

"This time, they are dead serious"

Mandala Airlines says it will be back in the air next month, despite failing on a previous occasion to meet a resumption deadline it set itself. The airline is racing to meet a Feb. 15 deadline set by the Transportation Ministry to resume its operations, a deadline its 51 percent owner, private equity firm Saratoga Capital, is confident it will meet. “We are ready now,” said Devin Wirawan, a manager at Saratoga. Diding Sunardi, director of the air transportation directorate at the Transportation Ministry, said the ministry had completed the verification of Mandala’s fleet and it was in the final stage of issuing the airline operator’s certificate. The AOC requires the operator to have personnel, assets and systems in place to ensure the safety of its employees and the general public. It also lists the type of aircraft to be flown and flight destinations.

“We are in the final stage now,’’ Diding said. “We set February 15 as the deadline for the airline to fly. If they cannot meet that, its license will be revoked.” Should the license be revoked, the airline would have to restart the process of getting the license, Diding said. For its Jakarta operations, the airline appears set to initially fly out of Terminal 1 at Soekarno-Hatta International Airport before moving to Terminal 3 in the middle of the year.

Salahuddin Raffi, director of operations at Angkasa Pura II, the airport operator, said the airline had notified it of its intentions. “Mandala told us that it will be stationed at Terminal 3 in June or July. There have been delays,” Salahuddin said. “We welcome them, and we will not cause any difficulties.” Angkasa Pura II operates 11 international airports, including Soekarno-Hatta. Devin said Mandala had 10 Airbus A320 aircraft, five of which are owned by the airline. “Two of the aircraft are ready in Singapore,’’ he said. Mandala stopped its operations in January last year under the weight of Rp 2.4 trillion ($269 million) in debt, returning its aircraft to its lessors amid rising operational costs. In a debt-restructuring deal reached in April, the airline converted its debt into 6.89 million shares, or 15 percent of Mandala’s total equity. In September, a Saratoga representative said he was hopeful the airline would return to the skies within 90 days. Investor Daily, with additional reporting from Francezka Nangoy 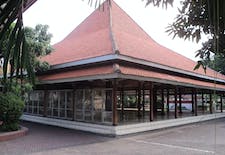